We have been SO BUSY! And right now I have only about 15 minutes to post before getting ready for a memorial service for Norman Douglas Hutchinson. A famous painter (including Queen Elizabeth and other members of the royal family), we met Norman and his beautiful wife and muse Gloria at the Fairlawn last year. Sadly, he passed away last June. Tonight's Anglican service will be held at the 'Old Mission Church,' the oldest church in Kolkata. So, you are getting the short and sweet version of the week so far!

On Monday we visited a vocational school for 14 and 15 year old girls. Here they learn to embroider and sew so that they can get jobs. The classes are after their school day. They are also given terrific self esteem boosts through drama and music. Each volunteer worked with a student and we sewed a small bag on which the girls had embroidered both our names. Afterwords the girls entertained us with a performance from their Christmas drama (an Indian story, not a Christmas story, it's just performed at Christmastime). Kira and Caitlin sand and signed 'Love Grows" and we all had great fun!

On Tuesday we traveled for 2 1/2 hours to the village of Kharmagachi where we visited another vocational program aimed at empowering the girls and helping them, with employmemt. We will post pictures soon so you can see their beautiful sewing and embroidering and hand painted cards. You can also place orders if you like something. One of our volunteers from last year, Michelle Marx (who happens to be my cousin!) funds both vocational programs. Thank you Michelle, the girls are doing great things and the school in Kharmagachi has more girls (and even a few boys) than last year. Women from the village performed traditional dances for us. Afterwords, we all danced with the women and Willson even took one of the large drums form one of the men and played with the 'band.' It was a lot of fun! Hundreds of villagers were there clapping and laughing and photographing US! More on Kharmagachi later! 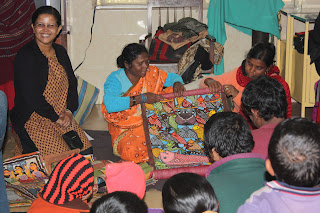 On Wednesday we went to the Rehabilitation Center for Children. Here is a photo of Kakali sitting next to Karuna who is holding one of her beautiful scrolls. These kids are mainly from the state of Bihar and can be in the hospital for surgery and physiotherapy for up to 2 years! Many had club feet and leg deformities. Children 3 years-old and younger can have their moms, but those older are on their own. The hospital is like a family and the children have art and music programs organized by Rosalie regularly. Here, Karuna from an artists caste showed us how she paints traditional scrolls. Made up of many panels, the scrolls can be up to 18 feet long. Each panel is sung as the artist unfolds the 'story.' These can be news events, religious stories, stories about marriage. She had a scroll about the tsunami that devastated Asia a few years ago. We then each took a child and they drew a single panel about something in their lives. Many drew their family and home or sports and other activities they liked. The volunteers colored the borders and the panel was glued to a piece of sari. Some of the students who participated were boys from a school for the deaf. Their volunteer teacher Christie was on Survivor Amazon several years ago! She is American, she is deaf, and has been here for many months volunteering for a school for the deaf. She has traveled the world raising awareness for the deaf community.

THEN, we were invited to a wonderful 90th birthday celebration for Mrs. Smith at the Fairlawn. A magician, music, dinner - it was so much fun and we danced till nearly midnight!!!! Her daughter Jenny Fowler now manages the Fairlawn. Jenny did a fabulous job putting the party together and guests, friends of Mrs. Smith, were in from around the world. Kira, Caitlin and Chelsea sang 'the Stevie Wonder version' of Happy Birthday beginning with "Isn't she wonderful" and there was not a dry eye in the house! Willson danced all night, singing along to the music, even ABBA which I am SURE he never heard before! However, he did know all the words to "I Will Survive" from watching the Replacements so many times I think. Tate is out official team photographer and I hope she can post some photos of the event. The rest of older folks danced all night too! 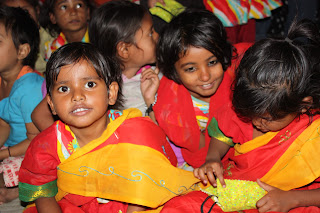 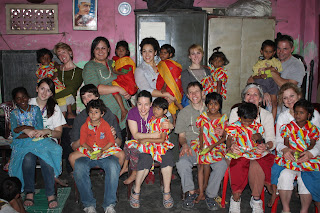 Today we went to a slum school and did a photo project with the kids. Here is a photo of everyone in the group - except David who took this picture. In the back, from the left, we have Patty, Kira, Chelsea, Caitlin and Gary, in the front, Tate, Willson, Andrea, Barry, Patty and me, Jeannie. And of course all of our beautiful, smiling children! On the top photo a few of the little girls dressed up for the occasion open small gifts brought by another volunteer Sandy who created the quilt project we will do with preschool kids another time. But, right now, I am out of time! Many of the volunteers are posting on Facebook, but we also hope to have some pictures posted here soon.
I am at Raj's Internet cafe on Sudder Street and Kira and Caitlin and Chelsea are here shopping for gifts (nice idea for people waiting for computers). Chelsea just bought a phone as she is staying on in India for another month or so. Gotta run!
Posted by Jeannie at 3:16 AM