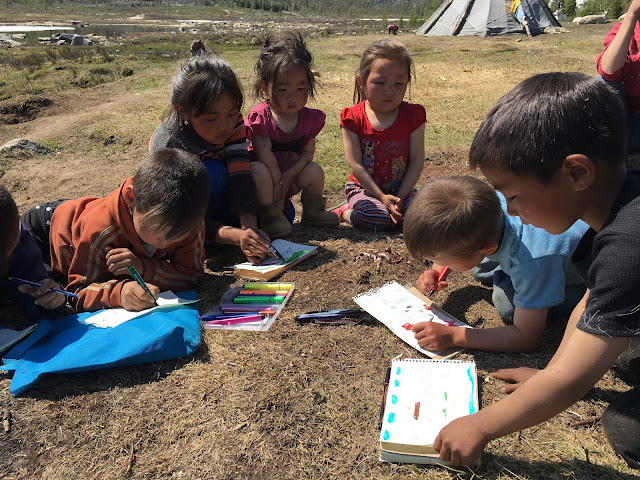 In the north of Mongolia, not too far from Russia, I just completed a small research study on tourism among the nomadic Dukha reindeer herders of the East and West taiga. This community moves four or more times a year taking their animals to fresh pasture. When not interviewing their parents, my interpreter, Chuka, and I also did some 'day in the life' drawings with the children. I had brought colored markers and paper. I've conducted this exercise in many countries with children throughout the world: kids on Fogo Island in Cape Verde drew volcanoes; children in India their villages in the countryside and their families; in Bulgaria they drew photos of the sports activities they enjoyed, pizza, flowers and friends.


We had samples to show the children too: Chuka lives on the opposite side of Mongolia near the border with China. She is from a nomadic family in the Gobi and drew a Bactrian camel and a ger (traditional felt covered circular house). Her family also herds goats and sheep and horses. Chuka put mountains in her photo (the Gobi is not just desert!). My picture showed row houses and the inner harbor of Baltimore, the city of my birth, complete with cars and a freighter. Though I now live in Danbury, CT, my childhood memories seemed more apropos for this project.

We wrote the children's names and ages as well as their most and least favorite things to do on the back of their drawings. I took pictures of their creations but let the children keep the originals.

Our artists ranged in age from three to fifteen. They live in urts and herd reindeer. The landscape, activities and animals of the taiga dominate their pictures. However, I was at first surprised to also see wooden houses and animals other than reindeer in their drawings.

I learned that the children spend a good part of the year in the sum, Tsagaan Nuur. A sum is a second level administrative district in Mongolia. There are 365 sum districts in the country. Tsagaan Nuur's name means 'white lake'. It has a total population of about 2,000 of which about 600 are ethnic Dukha. Here children and their families have access to television and movies  - even in the urts via satellite many families watch television and have short wave radios for communicating with the other camps. The television fare includes locally produced variety shows, Mongolian, Russian and Korean series, music videos, the news and much more (foreign shows are dubbed in Mongolian).

As we were returning to the sum from the taiga we visited a family's urts. There was a small flat screen television in the far end of the home. We had been without internet for eight days. While I could not understand his Mongolian, I did learn that the herder was giving us news on the US elections. I caught "Hilary" now and then in the conversation and was informed Clinton had secured the Democratic nomination.

For first to third grades, the children move to in Tsagaan Nuur sum during the winter with their mothers and attend school while their fathers and other herding families rotate taking care of the reindeer.  The children are fluent in both Mongolian (the language of school) and their native Tuvan. The winter camp is close to the sum center and can be reached by vehicle, so the children have the opportunity to go home to their families on weekends and holidays.

The sum center has no paved roads, somewhat unreliable internet, a hospital (one story wood building), one gas station, a bank, several small grocery stores, guest houses for tourists, a kindergarten, an elementary and a high school.

Out in the taiga people eat mainly milk products from their reindeer, including milk tea with salt, bread which is baked daily on top of the wood-fired stove in the middle of the urts, and 'noodles' with dried meat. The noodles are made from dough rolled into a thin, flat, round shape cooked very briefly on the wood stove, then cut into thin 'noodle' strips. These are steamed with the re-hydrated mutton meat to which oil has been added.  The herders use their reindeer for migrating and not for food. In town, the many small grocery stores stock basic household cleaning products, a few school supplies, preserved and fresh foods including rice, flour, pickled vegetables, ramen noodles, liquor, soda and candy. However, I was told that even in winter the reindeer herders diet does not change, consisting still of flour, rice, milk and meat.

After third grade, many children live in dorms throughout the school term. The schools and dormitories have no central heating and winters are brutal. Large free standing stoves vented through the ceiling, wood fired in summer and coal fired in winter, are located in the middle of the classrooms and lobby to provide heat.

There are no indoor toilets and the children use outhouses. A new cement framed dormitory is being built this summer to replace the wooden structure currently in use.  After high school, the Dukha children often opt to attend university, many on scholarships, in cities throughout the country, and sometimes in nearby countries. Some are now studying to be elementary school teachers, tour guides and scientists. Others we spoke to hope to be engineers or doctors,  or to return to herd reindeer like their parents.

As you can see, mountains and flowers, urts (the traditional 'teepee like housing), and animals dominate their drawings. The children like to herd, ride bikes, ride a horse, play basketball, play with friends, help their parents, and gather flowers. Of course, they also like to ride reindeer. While most said, "there is nothing I don't like to do!" a few thoughtful children put carrying water, picking up garbage and washing dishes on the 'don't like" list. One wrote, "I don't like snowdrops, they make me cold!"

Children as young as seven help to take out, bring in, and tie up the reindeer each day. They also help carry water from the river, lake or stream, serve guests bread and tea, mind young siblings, cousins, and neighbors - they have many chores when home from school and living in the summer camp. We asked one group of kids which they liked better, the town or the 'taiga' (countryside), and they laughed and yelled in unison, "the taiga!" It was beautiful sunny day, the snow mountains in the distance seemed to ring the camp, the nearby lake was filled with fish. I would agree, the taiga!

Here is their work.  Enjoy this small snapshot of the life reindeer herding children 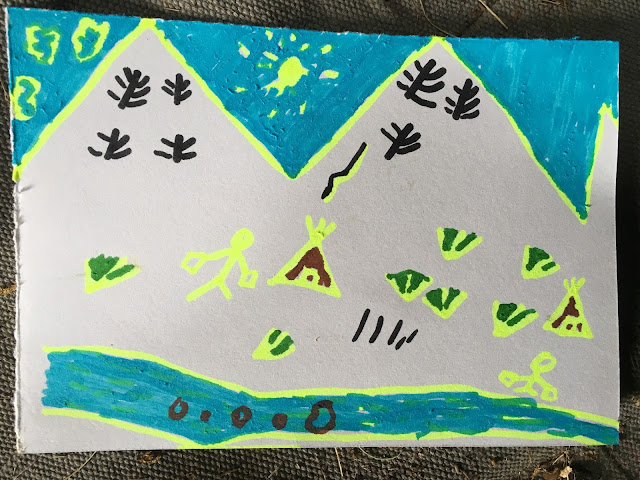 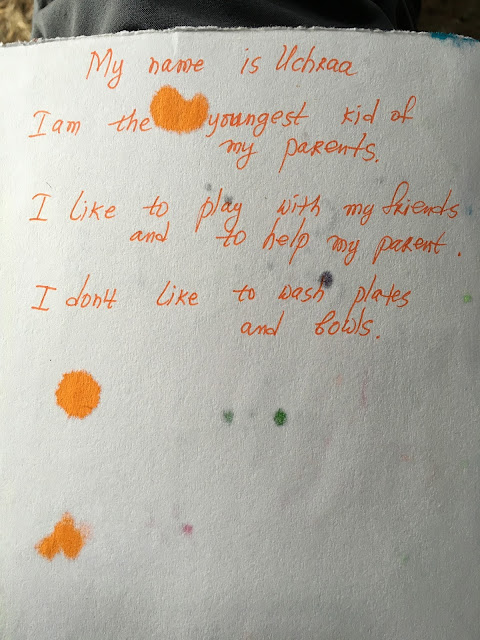 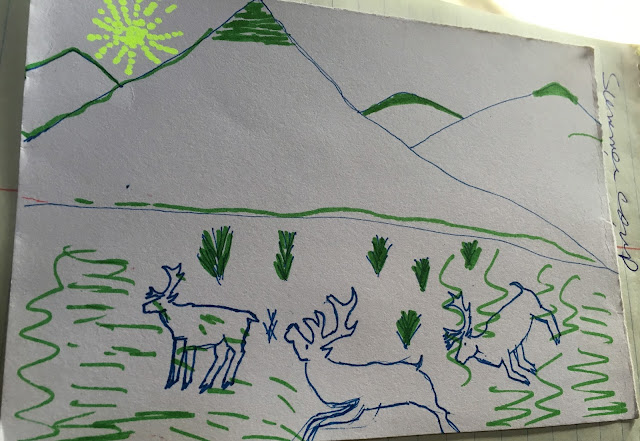 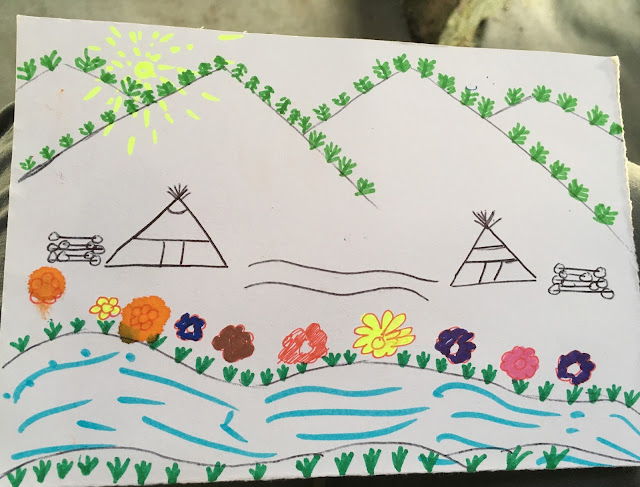 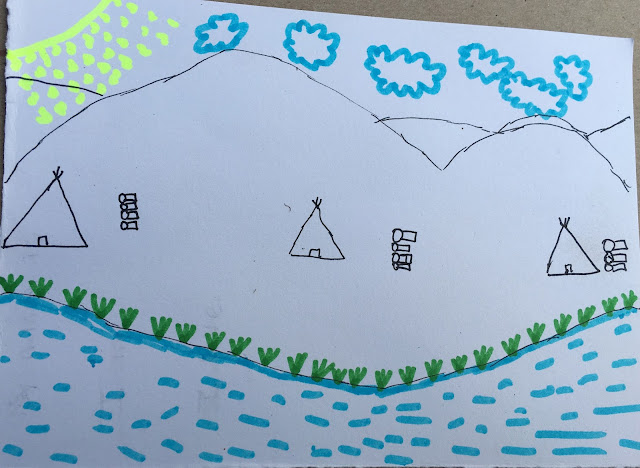 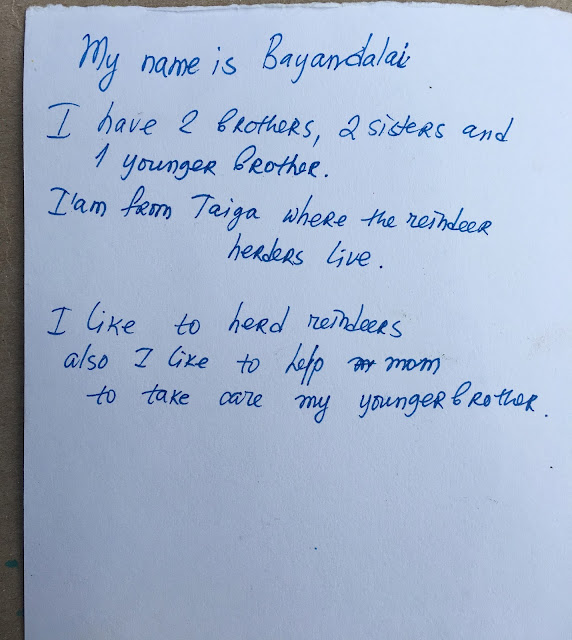 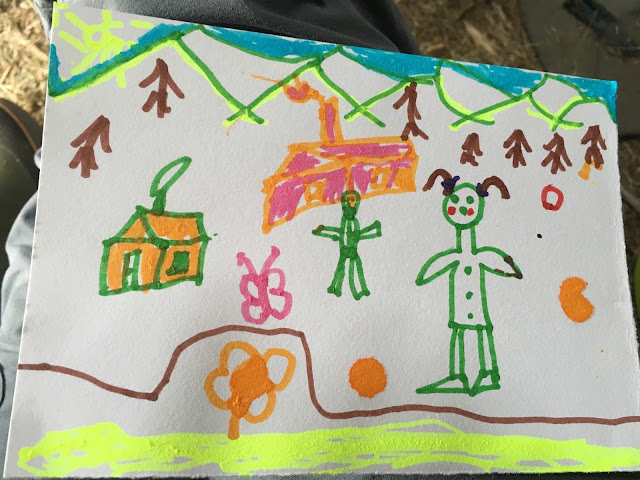 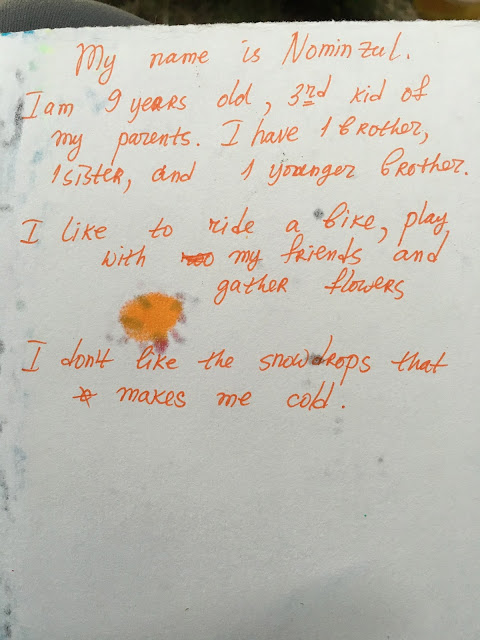 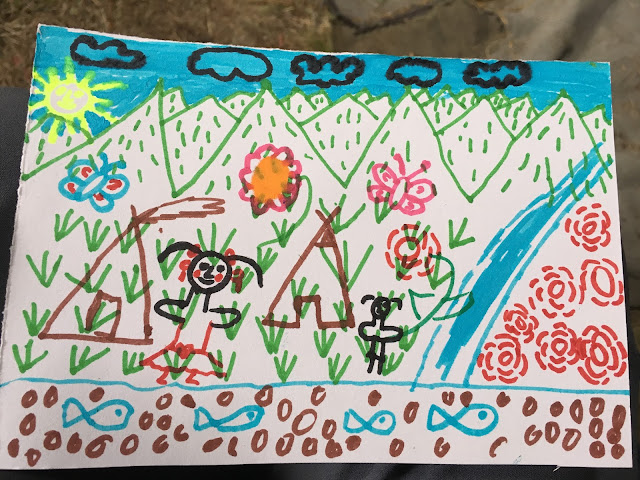 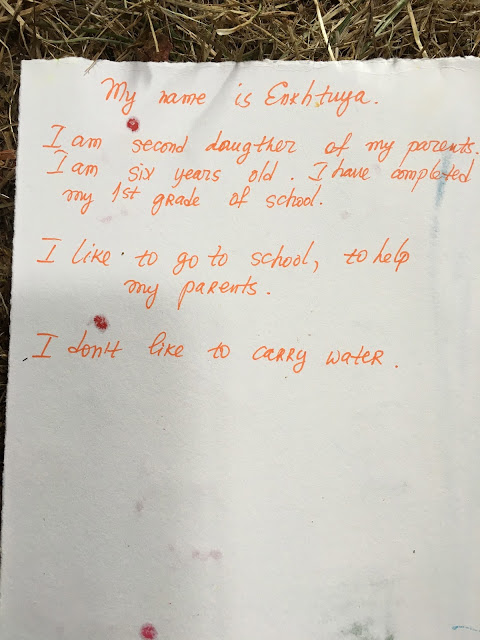 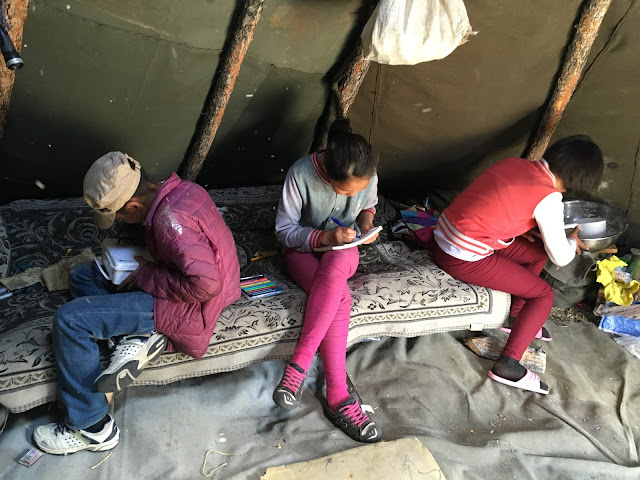 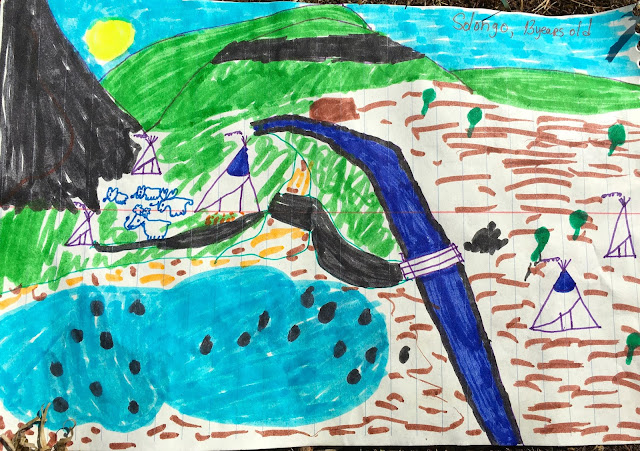 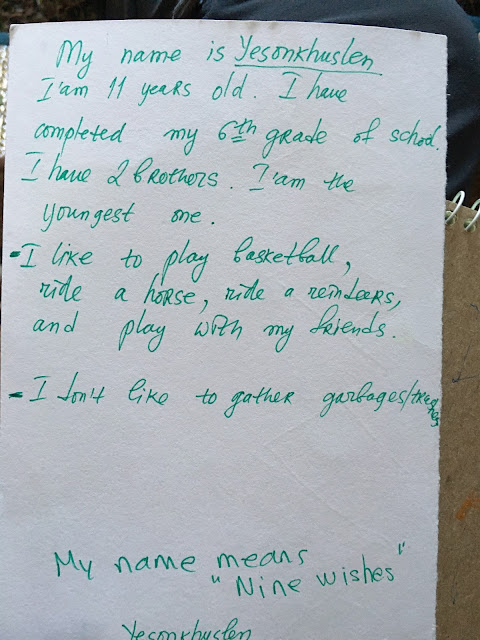 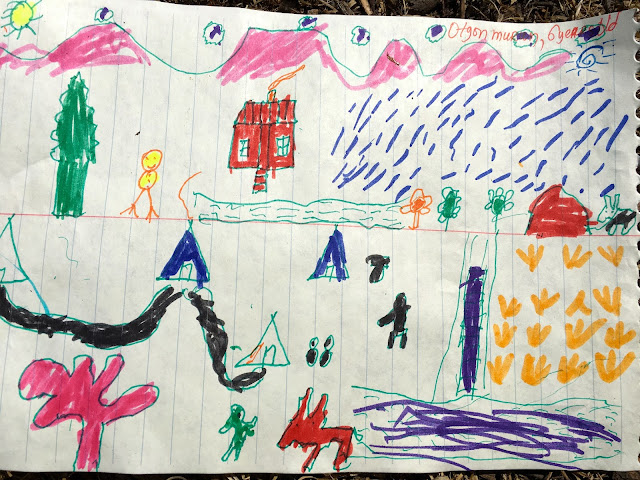 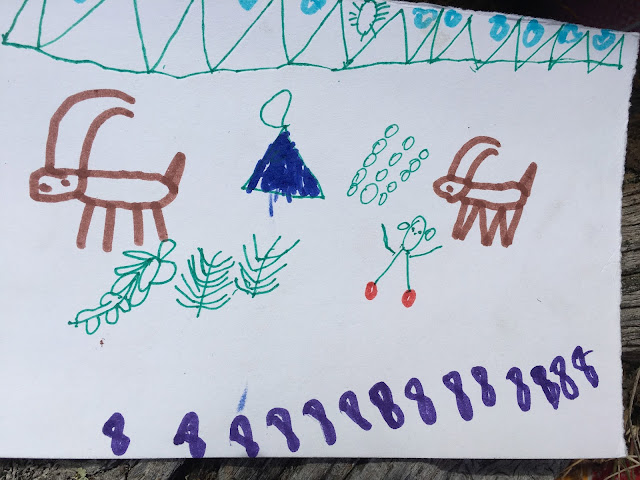 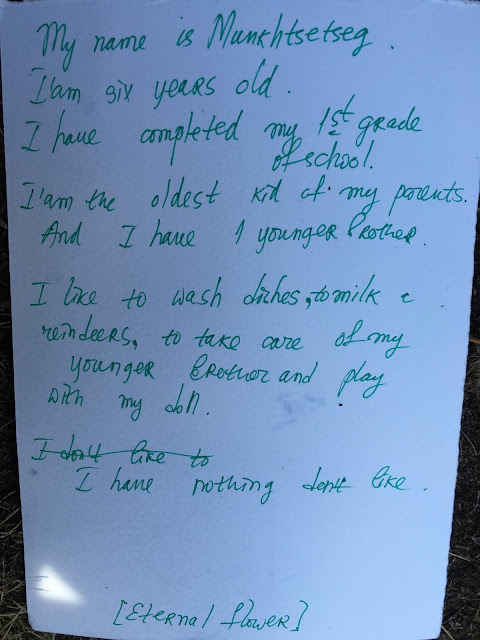 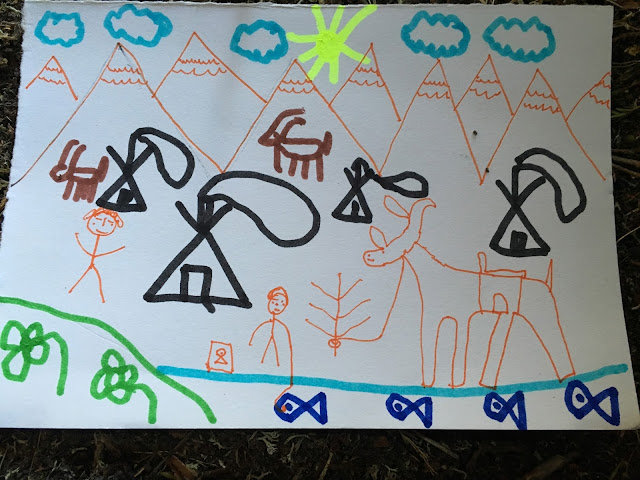 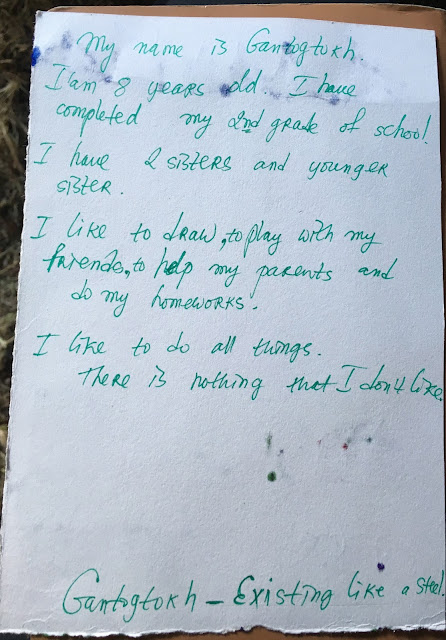 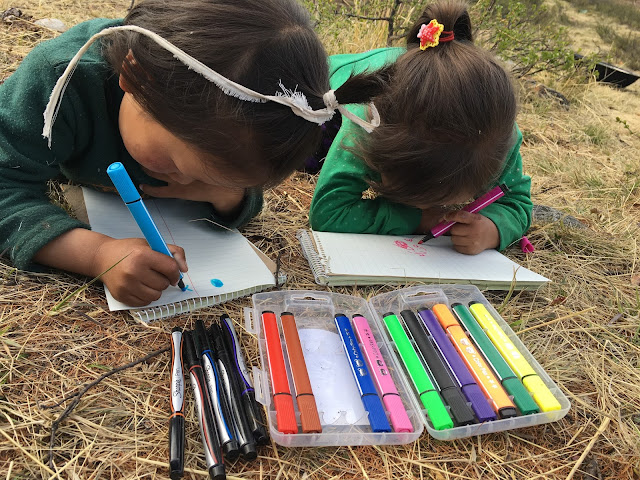