I've just finished my semester in Cultural Anthropology which ends with discussions of gender and social inequality and films on acid violence and social and religious restrictions of women's rights. With that in mind, I find my class lectures everywhere, in 'living color,' so to speak.

This week, Canada's new Prime Minister Trudeau announced he would launch an inquiry into murdered aboriginal women. In Papua New Guinea, violence against women is epidemic and women face horrific abuse from their domestic partners. It is estimated that in their lifetime, 70% of women will be raped or assaulted. In Brazil, violence against women, particularly women of color, "is staggeringly high." In the US, three women die every day as a result of domestic violence.

In these instances, and many more reports around the world, this everyday violence occurs in an environment of ignorance, male privilege, and often but not always, poverty. This study from the Lancet examined attitudes of males about rape in six countries, Bangladesh, China, Cambodia, Indonesia, Papua New Guinea, and Sri Lanka. In their research interviews, the word 'rape' was never mentioned. The majority of men who forced sex on women started in their teens, were unmarried, had low levels of education, were victimized as children, and were raised without a father present. These men gave as their primary reason for rape a "sense of entitlement" (73%), followed by a search for "entertainment" (58%).

In every girl's life she'll often hear messages, sometime subtle, that promote weakness and silence, words that praise her for being pretty and companionable instead of smart and strong. This kind of socialization can mean that some girls learn to be silent, to internalize guilt and see things that hurt them as their fault. In this kind of environment, some boys learn to be privileged, entitled and to use their physical and verbal strength to silence girls. Let's be conscious of our words and actions and flip the script.

Posted by Jeannie at 7:11 AM No comments:

Gender identification, the social construction of masculinity and femininity. In traditional societies, your gender would shape your work role in life and was not limited to male and female only, but included, and still includes, hijra (South Asia), khanith (Oman), fa'afafine (Polynesia), and kathoey (Thailand), to name just a few of the hundreds of gender categories found worldwide. In Nepal, Pakistan and India, hijras are a recognized third gender. Thailand is considering doing the same for kathoey. In the West, your role in society is less tied to your gender identification, which allows to people to use hundreds of creative expressions to identify their gender role and sexual orientation. Or to not identify (see below). Even the toy retailer, Toys "R" Us, has gone gender neutral online, doing away with categories labeled 'boys' and 'girls.'

BBC News has an interesting article looking into the linguistic challenges to gender and sexual non-identification. The full article is pasted below or you can read the original by clicking Beyond 'he' and 'she': The rise of non-binary pronouns.

Being Black in Japan

This is very interesting. A documentary made by an American woman and a Japanese man depicts Japan as a mostly friendly land of opportunity for black people, especially in comparison to the United States. This is quite a change in this country from the language and attitudes once directed at people whose lineage was not 100% Japanese. You can view the full video here .

This year too a woman of African American/Japanese descent became "Miss Japan," an honor that would have been unthinkable in the past when Amerasians were disparagingly referred to as "Madame Butterfly tots" or "dust of life."

Posted by Jeannie at 6:02 AM No comments: 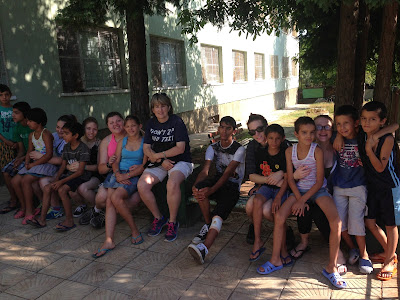 The building is in constant need of repair. We donated funds towards the renovation of the boy's bathrooms, which was completed shortly after we left. We have also put money renovation of the girls' bathrooms and will continue to fund raise so that this can be completed next summer. 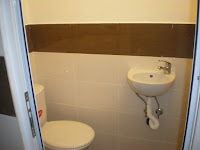 We played sports, took the children swimming at the community pool and on an outing to Ledenika Cave, wrote poems, created art masterpieces, played games (UNO, puzzles, matching game) and helped paint the older girl's rooms - the latter alongside a wonderful group of volunteers from Holland. The week ended with a talent show and pizza party, with singing dancing and other special talents. Needless to say, the children were stronger in the talent department than the volunteers! We also made S'mores, a new treat for the kids and they loved it.

We'll see the children again next year the first week of August. For more information about volunteering with Corawill, email Jeannie at corawill.inc@gmail.com. 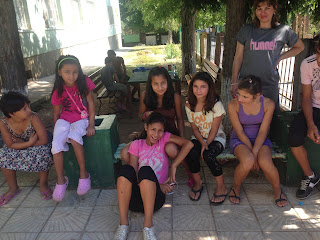 Swedes Get 16 Months of Materinity/Paternity Leave

From Upworthy. An update on Paternity Leave In Sweden.

Sweden has the United States beat on affordable furniture, tasty meatballs, free university, and now, plans for an even more generous paid family leave program. The Swedish government submitted a proposal this week to add an extra month of paid leave specifically for fathers. While the plan needs approval from parliament, officials are confident the legislation will pass, CNN reports.

Sweden grants 16 months of paid leave to be split between both parents, with 60 days dedicated to the father. Beginning in 2016, dads would get an additional month to take off. Each parent would stay home during the first three months after birth and then split up the remaining 10 months however they chose. During this leave, parents would receive 80 percent of their salary. Sweden’s program is one of the most generous, but other countries, including France, Finland, and Germany, also offer paid family leave for more than a year.

Of 185 countries, only the U.S. and Papua New Guinea have no mandated paid parental leave. The U.S. allows 12 weeks of unpaid leave during which parents cannot be fired for staying home to care for a newborn. Three states—California, New Jersey, and Rhode Island—have paid parental leave programs. Parental leave has become a campaign issue, with Democratic candidates Hillary Clinton and Martin O’Malley calling for federal reform to protect new parents.

More than 80 percent of American mothers return to work within a month of giving birth. When a mother returns to work before the first 12 weeks are up, the child is less likely to be breast-fed and receive immunizations on time and more likely to have behavioral problems, according to several studies. Championing Sweden’s progress, several Americans have asked U.S. officials to follow the European country’s lead.

In India, a man marries a third wife to supply house with water during the drought. Patriarchy and social roles bounded by sex undermine gender equality worldwide. Visit the web site at " Drought-hit Indian village looks to 'water wives' to quench thirst."

By Danish Siddiqui
DENGANMAL, India, June 4 (Reuters) - In the parched village of Denganmal, in western India, there are no taps. The only drinking water comes from two wells at the foot of a nearby rocky hill, a spot so crowded that the sweltering walk and wait can take hours.
For Sakharam Bhagat, as for many others in the hamlet some 140 km (85 miles) from Mumbai, the answer was a 'water wife'.

Bhagat, 66, now has three wives, two of whom he married solely to ensure that his household has water to drink and cook.  "I had to have someone to bring us water, and marrying again was the only option," said Bhagat, who works as a day labourer on a farm in a nearby village.
"My first wife was busy with the kids. When my second wife fell sick and was unable to fetch water, I married a third."

Bhagat and his family are suffering the consequences of a critical shortage of safe drinking water in India's villages, as well as the fallout from the most severe drought that his state, Maharashtra, has faced in a decade. In Maharashtra, India's third-largest state, the government estimated last year that more than 19,000 villages had no access to water. And India is again facing the threat of a drought this year, with monsoon rains expected to be weaker than average.

In Denganmal, a cluster of about 100 thatched houses set on an expanse of barren land, most men work as farm labourers, barely earning the minimum wage. Marrying for water has been the norm here for many years, villagers said. Bhagat's wives all live in the same house with him but have separate rooms and kitchens. Two of them are entrusted with fetching water, while the third manages the cooking.

Polygamy is illegal in India, but, in this village, "water wives" are common. "It is not easy to have a big family when there is no water," Namdeo, another villager who has two wives, said. Bhagat says the women, some of them widows or abandoned, are also happy with the arrangement. "We are like sisters. We help each other. Sometimes we might have problems, but we solve them among ourselves," his first wife, Tuki, said.

Posted by Jeannie at 6:47 AM No comments:

Children living in dire circumstances. Get your tissues, you are sure to cry. From PBS News. A girl plays with her brother as they search for usable items at junkyard near the Danyingone station
in the suburbs of Yangon, Myanmar, in 2012. Photo by Damir Sagolj/Reuters

Worldwide, more than 340,000 children under age 5 died from diarrheal diseases in 2013 due to a lack
of safe water, sanitation and basic hygiene. That’s 1,000 deaths a day, according to the UN’s statistics.
What’s more, the No. 1 killer of children between the ages of one month to 5 years, pneumonia, can
also be spread through a lack of hygiene.
Although much improvement has been made in the past decade to aid children across the globe, there are still alarming numbers who do not have access to clean water, proper sanitation or even just a way to clean their hands — especially after coming in contact with waste and feces.

“A gram of feces can contain ten million viruses,” said Sanjay Wijesekera, Chief of Water, Sanitation, and Hygiene, Programme Division at UNICEF. “Many diseases are transmitted by pathogens going from feces to food and fingers and so on, making children ill.”

For the past two summers I have traveled to a social home in Bulgaria to conduct painting and socialization programs. The children are seven to 17 years old. We arrive at the end of July when the weather is hot, so in the afternoons the children sit and watch Turkish soap operas on television. Sometimes they also watch shows from India, but the Turkish shows are very popular.

I had wondered what kind values the children would be learning from these shows, thinking of the torrid story lines we have in the US on daytime television dramas, but after learning of the following, I think I need not worry as much. It seems for many women these Turkish soap operas are an inspiration. To many women in the Balkans, as well as North Africa and the Middle East, these stories offer a momentary escape from lives of inequality and harassment and perhaps hope that in the future women's lot will improve.