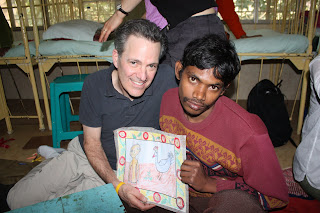 Back. So we left off at the railroad crossing on the way to Kharmagachi. We did make it, and contrary to what my senses told me, I did not have any teeth shaken loose on the washboard roads. The drivers were constantly lost, stopping to cross-examine pedestrians along the way and arguing between them, until we finally got to the village. Shelley received us in her house, and then we walked to the vocational school. I can't believe how much improved the girls are as artists! Thanks to Michelle Marx's generosity, an art instructor comes three days a week to teach them, and the lessons have clearly made a difference. Their pieces are beautiful. There are delicately designed and painted cards, and hand-stitched saris and other fabric pieces. I couldn't resist one of the saris - it has a beautiful pattern with peacocks on a red silk cloth. I might even wear it myself. Not to the office, probably. We dawdled there for a bit, and then wandered down a lane into the fields. Along the way, a woman came out of one of the houses and told us (!) that we were coming in. So we did. Within minutes there were plastic chairs collected from several of the neighboring homes and set in a circle in their swept-dirt courtyard. She offered us lunch. Caitlin, Chelsea and Kira started some games with the little kids, and soon we had a crowd watching and laughing with us. It was a great spontaneous party.
From there, we went to a field where some older boys were playing cricket. We were shown to a line of plastic chairs, and shortly after, dancers and drummers came to do a performance of traditional dance and music for us. Some of us had seen such a performance last year in the small enclave in the village where these dancers live. They are of the untouchable class, and are segregated even within the small village of Kharmagachi. This time, though, we had at least 300 people from the village, perhaps more, standing behind us watching the dance. The drummers, all men, face the dancers, all young women, who are positioned in two lines of six or so girls each, one line behind the other. As drummers play, they turn slowly counter-clockwise, and the two lines of girls, arms entwined, perform intricate dance steps that take them in a circle so that they remain facing the drummers in a kind of orbit around them. There are several dances that we saw, each with a different beat and different dance steps, but all following this pattern of turning in a slow circle. After a few dances, they pulled us out to dance with them. Oh my! I did manage not to step on any of these tiny girls' toes, and even managed after a few orbits to get the dance step down. Our audience of several hundred laughed and hooted in delight. They mobbed us like we were rock stars after we were done. I am so happy at the progress that the girls have made with their sewing. Their work would sell quickly at any shop in the U.S.
On Wednesday we went to the Rehabilitation Center for Children (RCFC) in Kolkata. This is a remarkable place where kids with orthopedic disabilities come for surgery and rehabilitation. Most of the kids here have club feet or other leg deformities. If they are under the age of three, their mothers can stay at the hospital with them. Since many of them need several surgeries to correct their conditions, they stay for several months, and can stay for up to two years, at no cost to them. They have a terrific guy who makes the prostheses that the kids need in the hospital's own shop. He works with very old machines and plastic sheets to form custom-fit braces for the kids. This is a happy place, believe it or not. The kids are well cared for. Rosalie arranged for a scroll-singer to be there. She is from a caste that paints scrolls, consisting of many panels, that depict events, myths, jokes and other stories. These singers used to travel from village to village and sing the stories as they rolled through the scrolls to tell villagers of news and to entertain them. There are scrolls and songs that depict the great tsunami of a few years ago, and the events of 9/11. There is also the story of the wedding of the fishes, which ends with a greedy fish devouring all the others. In the age of the internet, this is a vanishing art. We are lucky to have seen this performed. Afterward, we each worked with one child to create a panel that depicts something from their daily lives. I worked with Ramesh Das, a disabled orphan boy. The instructor explained in Hindi what we were going to do, and, at first, Ramesh sat very still, just looking at the paper. I thought that perhaps he didn't understand, but finally he began to draw. As I worked on the border of the panel, Ramesh drew a smiling boy, and then a peacock, all with a blue pastel crayon. I thought he was done, but he grabbed one color after another and added detail and outlining to his figures. In the end, they were colorful, fanciful and full of life. He lives in an orphanage for boys, mostly deaf, run by a British man. A volunteer, Christy, had brought Ramesh to RCFC for the day. When she saw his drawing, she asked me if I had done it, or helped him do it. It seems that Ramesh had never responded much to efforts to draw him out, and she was amazed at what he had done. I got a hug and a smile from him when Jeannie took a picture of the two of us.
Posted by David at 8:08 AM