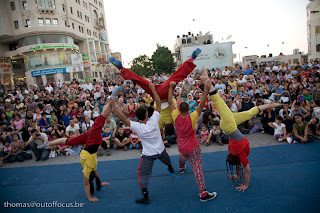 Circus school in Palestine? Yup! I read about the Palestinian Circus School on the blog ePalestine.

The school, founded in 2006, is a non-profit, non-governmental organization registered with the Palestinian Authority since February 2007. In the their own words:

We believe a future Palestine is possible, with people who dream of a better life and invest positive energies in their society. The occupation is devastating our lives, as individuals and as a nation. Trust, unity, dignity, respect and hope are under threat. With our circus school, we want to develop the creative potential of young people in Palestine to engage them, empowering them to strengthen their identity, and enter into a constructive and positive dialogue with each other, in order to become positive actors in their society. We offer a safe space where people meet in equality and by working together we achieve the most meaningful result.

Our goal is to overcome the divisions within our society by working with everybody, everywhere. By bringing people together in our trainings and traveling all over the country with our shows, we challenge the multiple boundaries that have been imposed on us for far too long: political, geographical, economical, religious and gender. 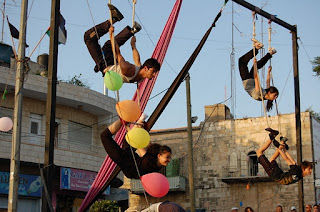 They have circus clubs for boys and girls in the West Bank, in Ramallah, Hebron and Jenin. In October 2011, the school started new circus clubs for beginners in Bethlehem, Al Faraa Camp and Birzeit. The Palestinian Circus school also has a summer camp and entertains people with their mobile circus and street parades.  What could be more healing for a people whose ethnic identity most often conjures the word 'occupation' or worse, 'terrorist'? Check out their web site, read about their mission, look over their photos and I think you too will be inspired - smiling.


For related blogs, check out:

Palestinian Children's Relief Fund: politics aside
Posted by Jeannie at 6:12 AM No comments: Links to this post

Dalits of India Place Hopes in the Goddess of English

The other day I started watching "The Sound of Mumbai," seen in a video clip here from Youtube. As I travel to Kolkata, India each year to volunteer with slum children I was drawn of course to this film. In my time with Indian children, I always feel I learn and gain in many ways much more from the experience than what I give, so I was intrigued by this effort to showcase Indian children singing the much-loved songs from "The Sound of Music." I will admit that it seemed rather ethnocentric that foreigners would find it useful to teach poor children English songs that have nothing to do with their background, ethnicity or environment. But I guess I was wrong.

In An "English goddess" for India's down-trodden, BBC News reported that the dalits of India are "building a temple in Banka village in the northern Indian state of Uttar Pradesh to worship the Goddess of the English language, which they believe will help them climb up the social and economic ladder."

The dalits, known as untouchables, are so low and vile that they perform the most polluted, menial tasks in Indian society, working with animals skins, waste and tending pigs and buffaloes. Ghandhi called them harijan, or "children of God." While discrimination based on caste is illegal in India, and has been since independence in 1947, many of the country's 200 million dalits face injustices daily, living in slums and squalor, attending school but made to sit and eat separately and suffering violence perpetrated by higher caste Hindus whose actions often go unnoticed or are disregarded.  Indeed, the Christian Solidarity Worldwide (CSW) charity has stated that while some crimes are reported, much caste-based discrimination and violence in India goes unrecorded.

Just this week, an Indian dalit boy was killed because he had the same name as that of high caste man's son. The boys father, Ram Sumer, had been given several warnings by Jawahar Chaudhary to change the names of two sons whose names were the same as his own, Neeraj and Dheeraj. The body of Neeraj, 14, was found in a field by two friends: he had been strangled. Chaudhary denies involvement saying he was framed, but two acquaintances of his have been arrested.

But hope springs eternal, and for the dalits of Banka, action means change. About two-feet tall and made of bronze, the newly 'minted' Goddess of English is modeled after the Statue of Liberty. According to Chandra Bhan Prasad, a dalit writer who came up with the idea:

She is the symbol of Dalit renaissance. She holds a pen in her right hand which shows she is literate. She is dressed well and sports a huge hat - it's a symbol of defiance that she is rejecting the old traditional dress code. In her left hand, she holds a book which is the constitution of India which gave Dalits equal rights. She stands on top of a computer which means we will use English to rise up the ladder and become free for ever.

While Hindi is the most widely spoken, there are dozens of languages regularly used in India with hundreds more in use in rural areas. To communicate, Indians often use English as their lingua franca. In Banka, Nalanda school principal Shiv Shankar Lal Nigam says that "It's not possible to get by in today's world without English. Even to communicate with people in other Indian states, you need to know either the local language or English. Since you cannot learn multiple Indian languages, English has to be used as the link language."
To succeed in medicine, education, engineering, IT, virtually any job of consequence, it is important to know English. Dr Bhimrao Ambedkar, a Dalit thinker and architect of the Indian constitution, is quoted by Chandra Bhan Prasad as stating that "English was the milk of a lioness, only those who drink it will roar."

To avoid discrimination, some dalits converted to Christianity, but some found even this unsatisfactory (read Indian Dalits find no refuge from Caste in Christianity) . The government of Indian passed legislation decades ago to remove and make punishable prejudice and wrongdoings aimed at dalits to no avail. Perhaps the Goddess of English will help dalits combat caste inequality: after all, the origins of caste discrimination are embedded in Hinduism, perhaps it necessary to fight centuries old religious beliefs with an equally imposing supernatural 'force.'
Posted by Jeannie at 7:18 AM No comments: Links to this post