Grafitti in Queens No More

There is street art in 5Pointz no more. A mecca for 1500 graffiti artists from around the world had their canvas whitewashed recently in Queens, New York, to make way for housing. Artists mourned, vigils were held, developers apologized. If all agreed that this graffiti was art, not vandalism, why not find a way to preserve the paintings for other 'pilgrims' to visit? Stone-by-stone, wealthy art patrons brought medieval architecture to Manhattan, why not move a local warehouse facade to a new home in one of the boroughs?

For the full story read, Night Falls, and 5Pointz, a Graffiti Mecca, is Wiped Out in Queens.

Photographs of the graffiti, before the fall, from The New York Times. 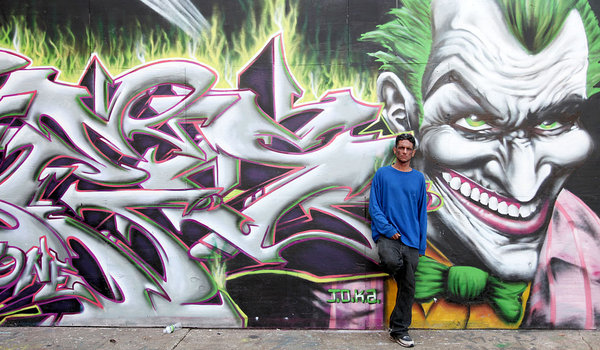 Posted by Jeannie at 5:55 AM No comments:

As today is World Toilet Day, I am re-posting the UN Secretary General's comments for this occasion. I am also posting below a short video on the Bhangis of India. They are of the lowest of the low, the dalits, or untouchables. It is the job of these Bhangis, generation after generation, to work as waste scavengers. This includes the emptying of public toilets in their communities, everyday, with their bare hands. Illegal since 1993, waste scavening continues. While one group has the benefit of basic sanitation, another endures hardship and disease to make it possible.

New York, 24 July 2013 - Statement by the Deputy Secretary-General on adoption of the General Assembly resolution 'Sanitation for All'

I am delighted and grateful that Member States have adopted a resolution officially designating November 19th as World Toilet Day.  I thank the Government of Singapore for its leadership on a crucially important global issue.  This new annual observance will go a long way toward raising awareness about the need for all human beings to have access to sanitation.

Despite progress toward the Millennium Development Goals, one in three people do not have a basic toilet.  Almost 2,000 children die every day from preventable diarrhoeal diseases. Poor sanitation and water supply result in economic losses estimated at $260 billion annually in developing countries.

Proper sanitation is also a question of basic dignity.  It is unacceptable that women have to risk being the victims of rape and abuse, just to do something that most of us take for granted.  It is also unacceptable that many girls are pushed out of school for lack of basic sanitation facilities.
This new resolution builds on the General Assembly’s “Sustainable sanitation: the drive to 2015”, agreed in 2010, and adds momentum to the Call to Action on Sanitation that I, on behalf of the Secretary-General, launched in March this year.

I urge every country to accelerate progress towards a world in which everyone enjoys this most basic of rights.  I look forward to working with all partners to make Sanitation for All a reality.

Posted by Jeannie at 8:01 AM No comments:

World Toilet Day, celebrated every year on November 19, is an international day of action "that aims to break the taboo around toilets and draw attention to the global sanitation challenge." Today, 2.5 billion people do  not have access to clean water and a safe toilet. To honor 2013's World Toilet Day,  here are photos posted by Reuters of the world's only "toilet theme park" located 19 miles south of the capital city of Seoul in Suwon, South Korea. There is even a souvenir shop!

The museum opened in 2012. It is located in the home of the former mayor, Sim Jae-Duck, who was born in his grandmother's toilet. Today, Jae-Duck lives in a toilet shaped house and has "made it his life's work to advocate for clean, efficient, and working sanitation for more than 2 billion people living without toilets worldwide."

His house is a 4,520-square-foot steel, concrete, and glass structure that cost $1.1 million to build. At it's center is a glass walled bathroom that occupants can turn opaque at the touch of a button. The home also has a roof-top balcony reached only by a "toilet drain" staircase.

In France, Art in the City

In France a case of the government renewing urban spaces with art in mind. I like that, re-purposing and transforming cities, not just renovating, what they call a 'trans-disciplinary' approach, with architects, landscapers and designers. Re-posted here from Le Monde via Worldcrunch.

IVRY-SUR-SEINE — The Plateau special planning district in this small town south of Paris could almost be mistaken for a regular construction site. Since 2007 the multidisciplinary artist Stefan Shankland has guided the construction of some 1,000 apartments according to an “action research” program launched by the city government and developed over the course of 10 years.
The idea? “To integrate art with the transforming city,” by putting into place a HACQ ("high artistic and cultural quality") project.

In New Zealand, Warriors Behind Bars


Once Were Warriors trailer.

The US has the highest rate of prisoners per 100,000 people in the world . Housing these prisoners costs on average $25,000 per person a year.  However, America is not alone when it comes to high rates of incarceration. New Zealand too has seen an increase in people behind bars since the 1980s. Despite low crime rates, in twenty years the number of prisoners has doubled, in part due to 'tough on crime' laws - a situation similar to that in America. Also as in America, a minority is disproportionately affected. While in the US African Americans make up 13.6 per cent of the population, black males account for 40.2 per cent of prison inmates. By comparison, in New Zealand,  indigenous Maoris make up 15 per cent of the population but account for 50 per cent of prisoners, costing the government $94,000 a year each. High rates of child poverty, low rates of education, drug addiction, broken family ties, gang membership, and what seems to be the normalization of prison, all play a part. These social and economic issues mirror those found among incarcerated African Americans in the US.

In Al Jazeera's "Locked Up Warriors" you can read more about New Zealand's high rates of jailed Maoris. The article cites the fact that these disturbing incarceration rates occur at the same time that New Zealand is listed as the third most peaceful country in the world by the the Global Peace Index (Iceland is number one). In contrast, the US is rated a disturbing 99 out of the 162 among nations surveyed. (Could this be linked to the doubling of gun violence since 1950 in films targeting the 13 and under audience?)

Above is the trailer of Once Were Warriors, a film written by Alan Duff who adapted the screen version form his novel of the same name.  Released in 1994, the film, while fiction, gives a powerful view of how identity loss and poverty lead to violence in one Maori family.

Posted by Jeannie at 7:05 AM No comments:

To all my friends who volunteer to walk and foster and otherwise support abandoned pets, especially dogs. Here's a heart-warming report reprinted from TIME about a little stray dog rescued from India. Rupee and his owner reached the highest peak in the world, Mt. Everest, and it is believed that this Himalayan mutt is the first dog to do so!


A former stray dog has pulled himself up by the bootstraps and created a better life for himself. A life that includes becoming the first dog ever to climb Mount Everest.

Say hello to Rupee, the formerly homeless pup who was found starving in a dump in India. His owner, Joanne Lefson, rescued him and helped nurse him back to health, feeding him a high protein diet of boiled eggs and rice, the Daily Mail reports. Now, Rupee is strong, healthy and capable of climbing mountains. He’s become the first canine on record to climb Mount Everest after trekking for 10 days with Lefson to base camp, 17,000 feet above sea level.

Lefson told the Daily Mail that her biggest concern was whether or not Rupee could make it through the grueling hike. But his vet confirmed that he wouldn’t suffer from altitude sickness since he was born in the Himalayas, and indeed, the pooch fared just fine. Before, his biggest accomplishment was probably being, like, the cutest dog on the planet.

For information on helping abandoned dogs in the US, visit Dogs on Death Row.