A Day in Tsagaan Nuur

Our drive from Murun to Tsagaan Nuur took 11 hours. It was a very bumpy but beautiful ride over dried mud tracks, through pastures of grazing sheep, goats, yak and horses. Our sturdy Russian Furgon forded streams like a vehicle built for the outback.  We made two stops on our journey.  At a ger canteen in Toom we lunched on hand cut noodles and mutton.

While waiting for our midday repast we enjoyed the scenery: one herder was mending her ger behind the restaurant. Across the way, while two small children played in a wooden cart, their family was unpacking their ger and household furnishings from their winter hut, readying for a move to their summer camp. In Ulaanuul, we visited Sas’s friend, Yura. Another nice reunion with hugs, catching up on news of family and friends. Yura welcomed us with soup and milk tea. 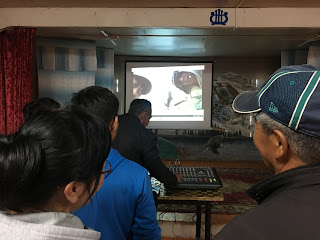 In Tsagaan Nuur we are staying in a guesthouse owned by Ganba and Nyamaa. On our first morning here we went to the Cultural Center to arrange a showing of “Migration.” Today, June 1, is Mother and Children’s Day in Mongolia. We arranged for the screening for later in the evening for the sum (county center) screening.

While at the center, Urangoo checked all of the equipment to make sure everything would be set for the viewing. This became the first screening of Migration in Mongolia. While Urangoo was doing her run through, the director of the center, the director of the library and the audio/video technicians watched the trailer.  Everyone was smiling; some were taking photos, all enjoying the amazing footage of the reindeer herders and their seasonal migration.

Battugla stopped by the guesthouse. He and Sas discussed how many horses and wranglers will be needed for the trip to the taiga. They decided on 11 horses and 5 wranglers for five people and packing all of the supplies, gifts and gear.  As he features prominently in "Migration," Sas showed him the trailer. It was fun to watch Battugla see himself on screen.