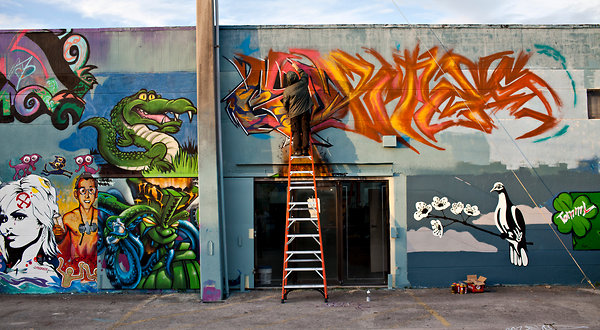 A re-post about graffiti art in Miami from the New York Times. Of course, one of my favorite forms of visual art! Continue below click here for the full article.

Breathing Life, and Art, Into a Downtrodden Neighborhood

MIAMI — Ski, a New York graffiti artist, swirled a can of spray paint, blasting a riot of neon in this once-forlorn slab of Miami called Wynwood. A few doors down, in a pop-up store, another artist, Asif Farooq, was selling an array of firearms — actually cardboard replicas for those who like everything about a gun except the shooting.

Wandering past was the Art Basel mob, thousands of people moving from mural to mural, gallery to gallery, reveling in the neighborhood’s nooks and crannies: looking, buying and, just as invaluable, creating word spreading the word. This 10-year-old December migration from the core of Basel, the prestigious four-day art show at South Beach that ends on Sunday, to Wynwood, one of Miami’s grittier sections, has propelled the neighborhood onto the year-round must-see lists of intrepid visitors and locals.
The newfound allure of Wynwood is the latest testament to how art — and creative developers, like Tony Goldman, who helped remake SoHo and South Beach — can sprinkle its metaphysical magic and transform even the bleakest places. “It’s unbelievable, the transition from desolate streets to completely filled energy where everybody is happy,” said Ski, who worked on the mural with 2esae and Col, two other graffiti artists, and is an Art Basel veteran.  A hiccup of time ago, trekking to Wynwood, a working-class Puerto Rican neighborhood, was a test in urban fortitude. Drugs, crime and a general sense of foreboding clung to the empty streets and warehouses.

The neighborhood, which sits in one of Miami’s roughest sections, endured a small riot in 1990 after a police officer was acquitted in the shooting death of a drug dealer. The riot was symptomatic of the area’s sense of isolation and served as a punctuation mark on 10 years of restiveness in Miami.
“There were a lot of body shops and dogs behind fences,” said David Lombardi, the founder of Lombardi Properties, who bought his first parcel here in the early 2000s. “Every window that had been a window had been locked up. Every fence that was here had barbed wire.”

Then Art Basel came to town in 2002, and the art slowly spilled over to lesser-traveled neighborhoods across the bay from Miami Beach. Satellite fairs popped up in the design district, which had long been home to furniture showrooms. When that became too expensive — Louis Vuitton and Hermès set up shop last year — attention drifted to midtown and Wynwood, both a bit farther south. In the aesthetic hierarchy of Miami, which boasts an iconic waterfront skyline, synthetically sculptured women and crystalline beaches, Wynwood is as appealing as a dollar store. But, as the axiom goes, its location (and price) were irresistible.

Mr. Lombardi, fresh off buying properties that had turned to gold in South Beach, first visited Wynwood in 2000. His initial impression was that the neighborhood was too close to downtown Miami and Miami Beach to ignore. His second thought was that cheap warehouse space would be useful and the bargain rates were impossible to beat. So he started to buy. As he meandered around streets littered with broken glass, he stumbled across two renegade art galleries in the neighborhood. Young people were hanging out, having drinks, talking art. “It went off in my head like a light bulb,” said Mr. Lombardi, who, it seems, cannot wander too far without a greeting from a tenant. “I saw what could be done.”

Mr. Lombardi began to court struggling artists who did not have gallery representation and could no longer afford South Beach. As they moved into the neighborhood, he started Roving Fridays, a stroll for cutting-edge art lovers who wanted to see the new scene for themselves. It was the precursor to the overwhelmingly popular and raucous gallery walk that happens in Wynwood on the second Saturday of every month. “By ’04, we probably had 15 to 18 galleries,” Mr. Lombardi said. “It was starting to happen. People liked the fact it was gritty and edgy. It was that dirty little secret.”
Serious art collectors like Martin Z. Marguiles held similar notions; he began the first phase of his gallery in a Wynwood warehouse in 1999. Donald and Mera Rubell were there even earlier; they kept their collection in a building that once stored goods confiscated by the Drug Enforcement Administration.

Then, with his star wattage and impeccable instincts, Mr. Goldman, who died in September, turned his attention to Wynwood. With Art Basel taking off, he envisioned the same artistic path for the neighborhood and started buying properties, luring more artists and finessing the place. Rents were low enough for artists to develop here. But there was no place to get a decent meal or buy a drink. So Mr. Goldman opened a restaurant, Joey’s. It became an immediate focal point, and a restaurant scene kicked into gear.

Graffiti artists delighted in the blank, ugly walls of the abandoned warehouses. They went to work, and soon their art became synonymous with Wynwood. The Wynwood Walls, Mr. Goldman’s creation, now draws thousands of people every month, even tourist streetscape tours. Artists like Shephard Fairey became frequent contributors (this year he created a mural featuring Mr. Goldman).
Word got out. “In my view, this was clearly the next Meatpacking District,” said Paul C. Lardi, the president of Maps-Mobile Arts Production, a recently opened professional photo studio that doubles as an event space. “It’s got great energy, but it’s not really a place for high-end retail. It’s for interesting people with artistic desires, not commercial ones.”

Now Wynwood is moving beyond galleries. Restaurants and bars with a fresh flavor are beginning to open. A crafts coffee place is booming. A New York mixologist, Albert Trummer, is preparing for an opening. And a recording studio that has drawn clients like Akon and Enrique Iglesias opened this year. “It’s a place to experiment,” Mr. Trummer said. The gaps are still evident. Residential housing is sorely lacking. Daytime foot traffic is often slow. Police sirens can still be heard racing down the neighborhood’s main artery. And so far, high-end galleries are in short supply; one recently moved out.

“We’re not there yet,” said Harold Golen, who owns a Wynwood gallery. “We are still pioneers. At times I wasn’t optimistic. But in the last year or two I am convinced it’s going to happen.”
Mr. Lombardi smiled: “As Tony Goldman used to say, ‘Here comes the neighborhood.’ ”
Posted by Jeannie at 5:17 AM