Every semester I ask my class to define childhood. What do children DO? What is their 'job'? The response: they play, they go to school, they are taken care of by their parents. Around the world are other children whose childhood is defined by hard labor. Whose 'job' it is to help provide for the family's welfare. Their education and health is not a top priority - for anyone.

June 12 was Child Labor Day. Here are images from Reuters showing us what that means. 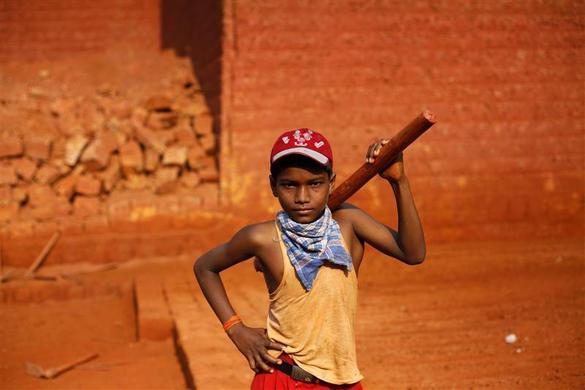 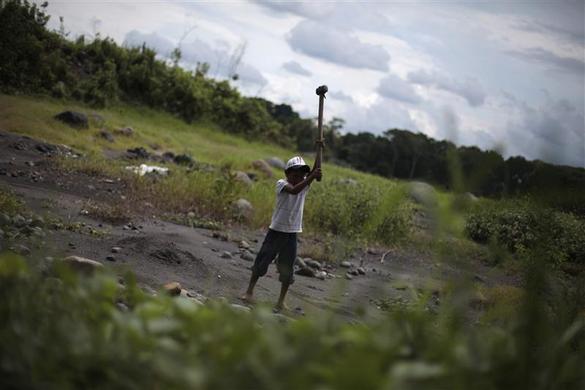 Josue Alexander Chavez, 9 years old, uses a hammer to break stones as he works near the road to Mazatenango, about 165 km (102 miles) north of Guatemala City, June 11, 2012, ahead of World Day Against Child Labor. Chavez works with his parents, breaking stones for the construction of houses. He works from 7am-5pm and makes 20 quetzales ($2.50) per day.
REUTERS/Jorge Dan Lopez 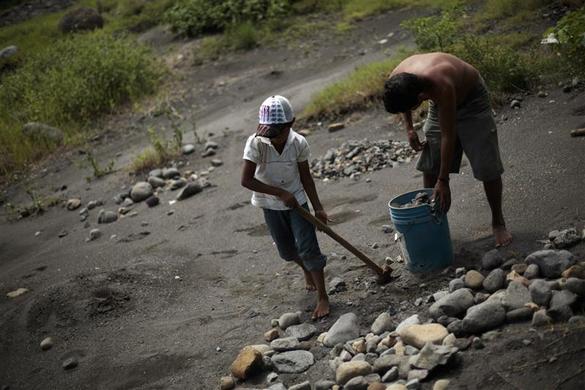 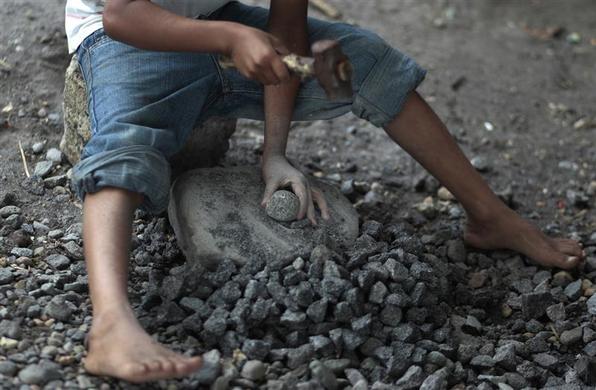 Josue Alexander Chavez, 9 years old, uses a hammer to break stones as he works near the road to Mazatenango, about 165 km (102 miles) north of Guatemala City, June 11, 2012.
REUTERS/Jorge Dan Lopez 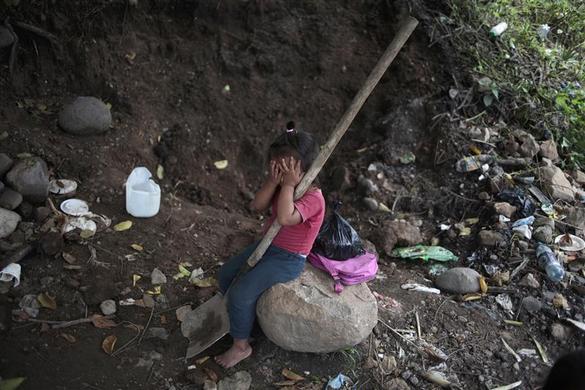 A girl covers her face near the road to Mazatenango, where she fills holes in the road with earth in exchange for money, about 165 km (102 miles) north of Guatemala City, June 11, 2012.
REUTERS/Jorge Dan Lopez 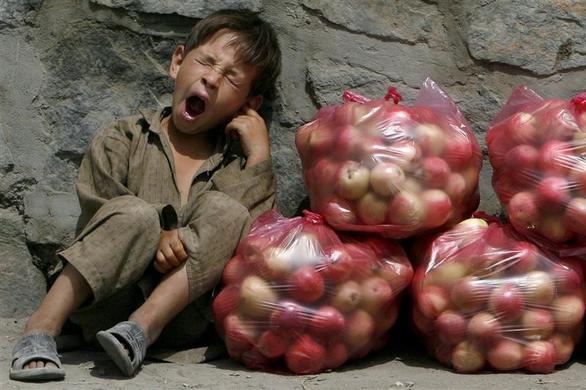 A boy yawns as he waits for customers at his roadside apple stall in Kabul August 6, 2008.
REUTERS/Adnan Abidi 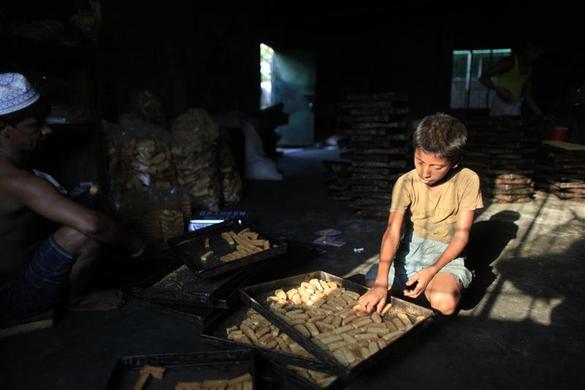 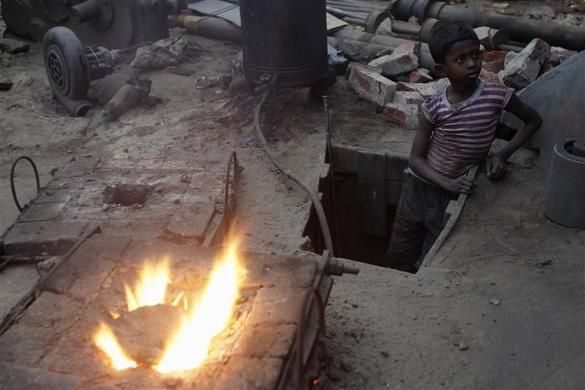 Naser, 7, works at a metal workshop which makes propellers for ships at a ship-building yard next to Buriganga River in Dhaka, January 8, 2012.
REUTERS/Andrew Biraj 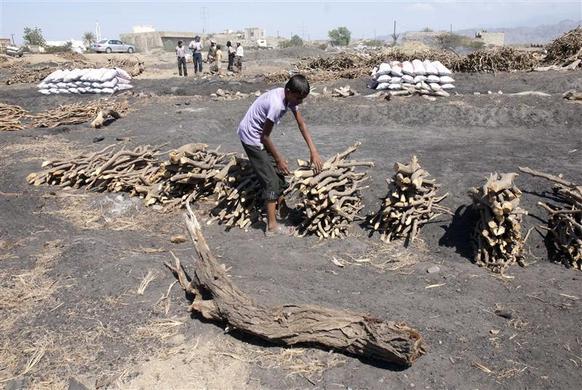 A boy works in a traditional factory producing coal about 30 km south of the city of Taiz, Yemen, December 12, 2011.
REUTERS/Mohamed al-Sayaghi 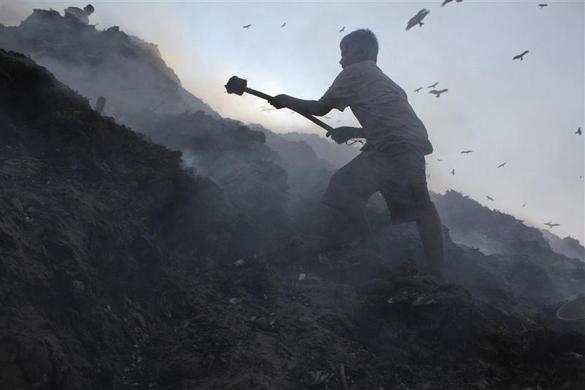 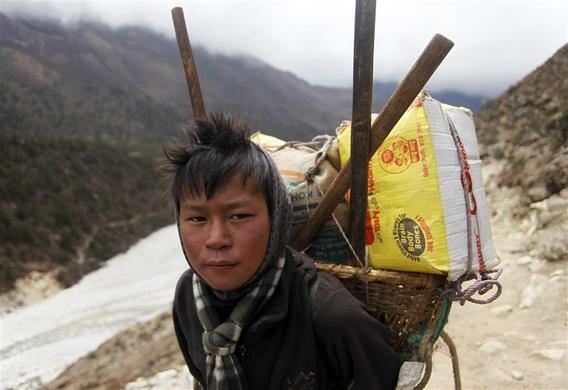 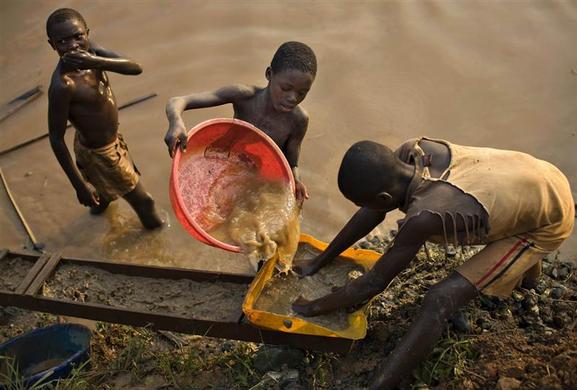 Boys pan for gold on a riverside at Iga Barriere, 25 km (15 miles) from Bunia, in the resource-rich Ituri region of eastern Congo February 16, 2009.
REUTERS/Finbarr O'Reilly 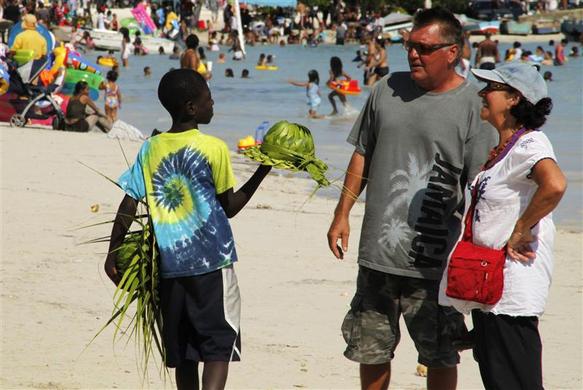 A boy tries to sell a hand made hat to tourists at a public beach in Boca Chica, Dominican Republic, April 10, 2011.
REUTERS/Eduardo Munoz 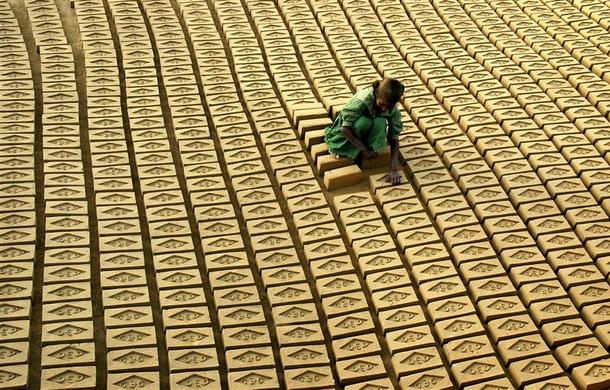 An Indian child laborer arranges bricks at a brick factory in Tharvai village, about 35 km (22 miles) from the northern Indian city of Allahabad, February 21, 2006.
REUTERS/Jitendra Prakash 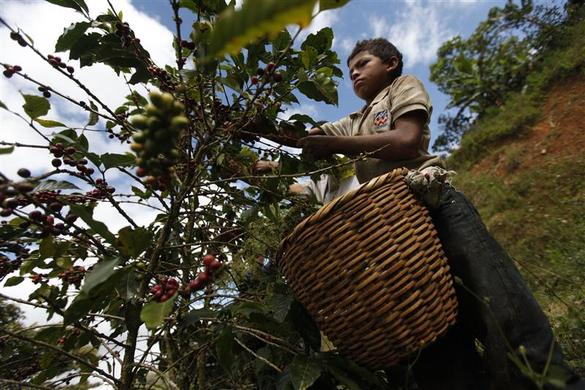 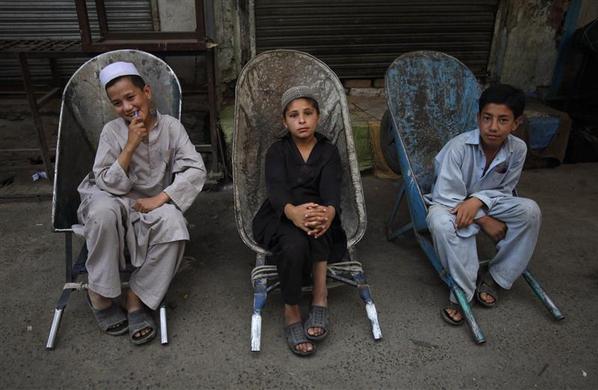 Child laborers sit on their wheelbarrows while waiting for work at a local market early in the morning in Abbottabad, Pakistan, May 19, 2011.
REUTERS/Akhtar Soomro 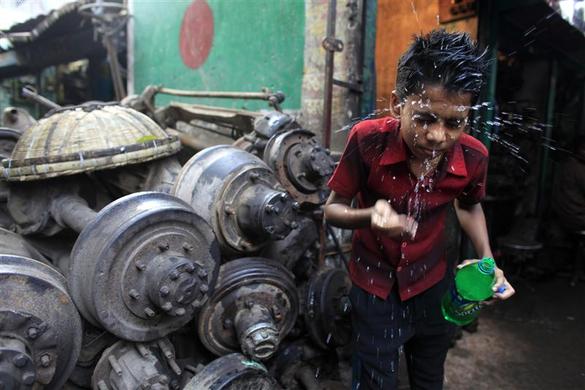 Riffat, 8, splashes water on his face as he works at a vehicle spare parts store in Dholaikhal, Dhaka February 29, 2012.
REUTERS/Andrew Biraj 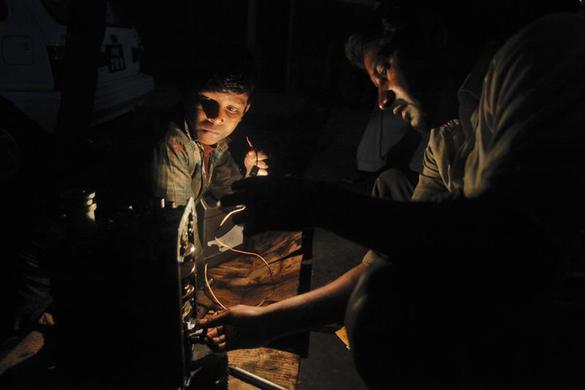 Simon, 12, holds a light to assist his supervisor working on a motorcycle engine at a workshop in Islamabad January 31, 2011. Simon earns 20 Pakistani Rupees ($0.22) a day working as a helper at the workshop.
REUTERS/Faisal Mahmood 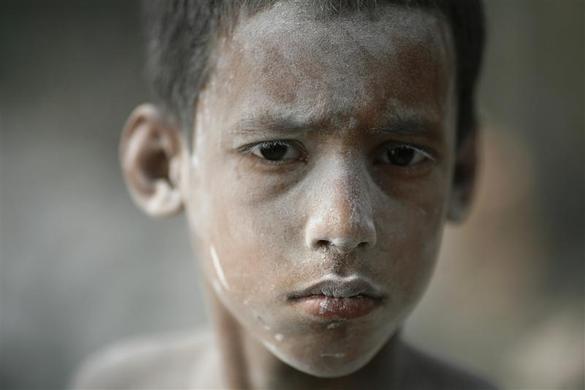 Czoton, 7, works at a balloon factory on the outskirts of Dhaka November 23, 2009. About 20 children are employed at the factory and most of them work for 12 hours a day. The weekly wage is 150 taka ($2.14) for the children.
REUTERS/Andrew Biraj 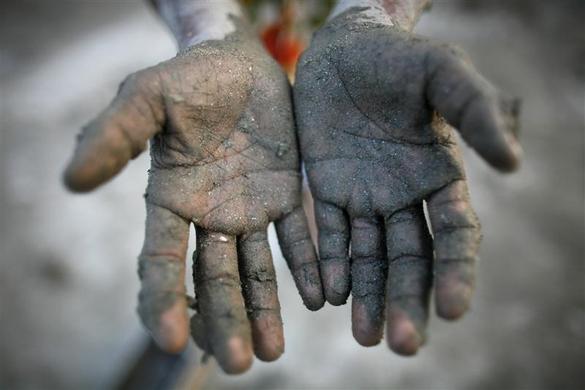 Tota Miya, 10, shows his hands after preparing soil to make bricks in a brick field on the outskirts of Dhaka November 21, 2009.
REUTERS/Andrew Biraj 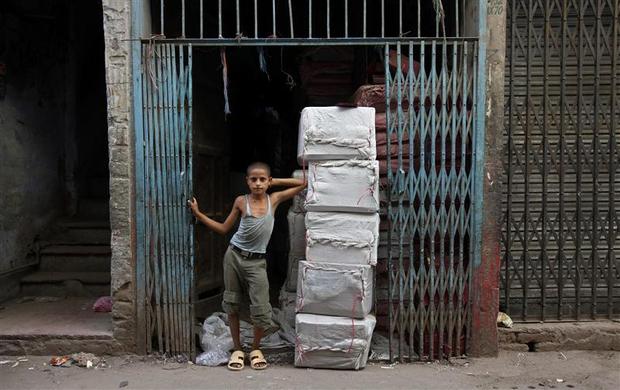 A boy poses as he stands in front of a shop selling scraps in the old quarters of Delhi May 12, 2011.
REUTERS/Adnan Abidi

An illegal immigrant boy from Myanmar collects plastic at a rubbish dump site near Mae Sot December 22, 2009. Despite terrible living conditions and the fear of being sent back to their country, several hundred illegal immigrants from Myanmar live and earn an average of $1 per day collecting plastic at the rubbish dump near the border town of Mae Sot.
REUTERS/Damir Sagolj 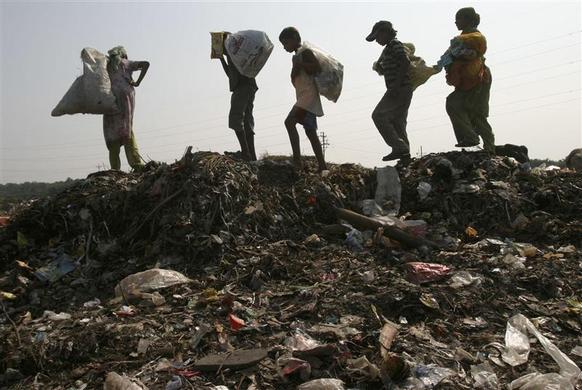 Children working as rag pickers search for scrap at a garbage dump in the northeastern Indian city of Siliguri November 14, 2008.
REUTERS/Rupak De Chowdhuri 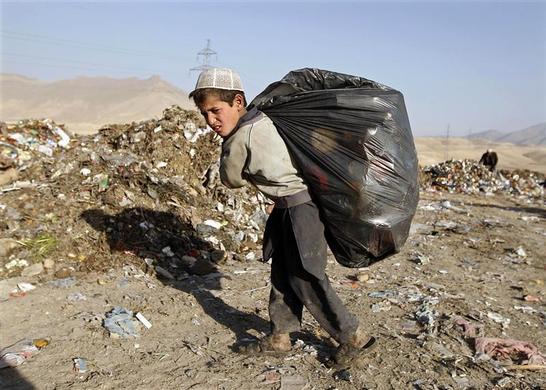 A boy carries rubbish for recycling outside Kabul December 15, 2010. About 1.2 million Afghan children carry out part or full time work, the government says, in a country where war, poverty, widespread unemployment and a preference for large families have created a huge underage labor market.
REUTERS/Omar Sobhani 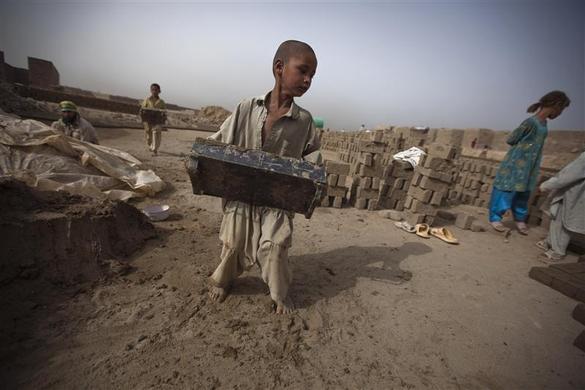 A boy works at a brick-making factory outside Kabul July 15, 2010. Laborers, most of whom work barefoot and without gloves, earn from $3 to $8 a day depending on their working hours and the number of bricks they make.
REUTERS/Ahmad Masood 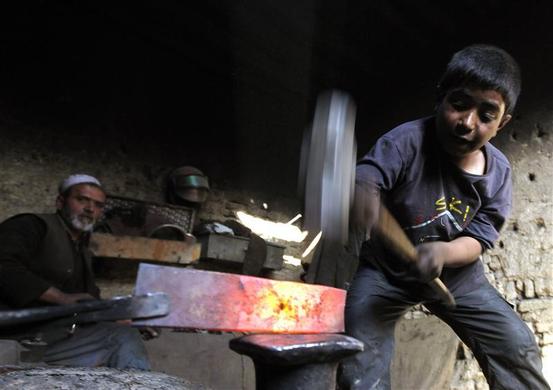 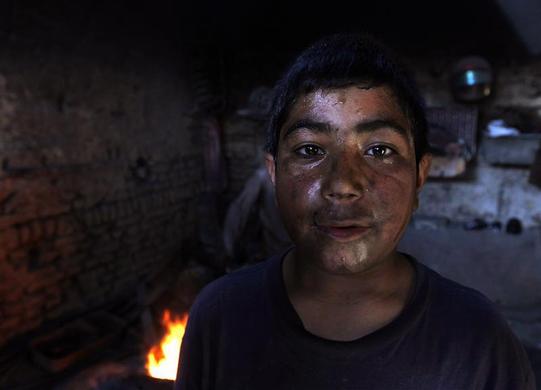 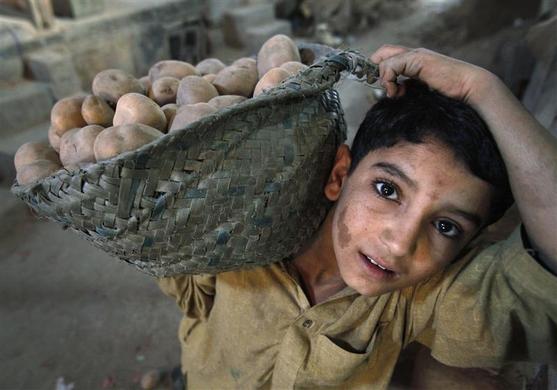 Siddiqullah,12, carries a basket of potatoes to nearby vegetable and fruit vendors in Karachi September 27, 2009.
REUTERS/Akhtar Soomro 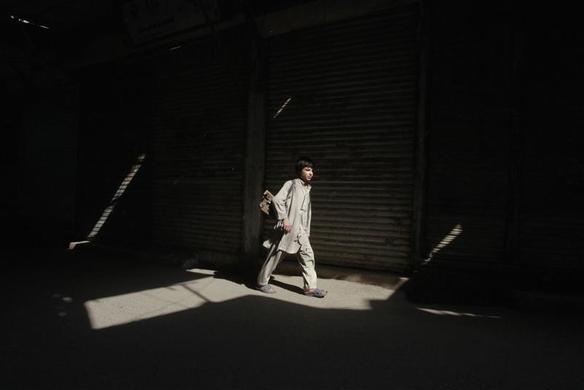 A cobbler walks in a closed market during a partial strike called by traders against power cuts in Lahore March 31, 2012.
REUTERS/Mohsin Raza 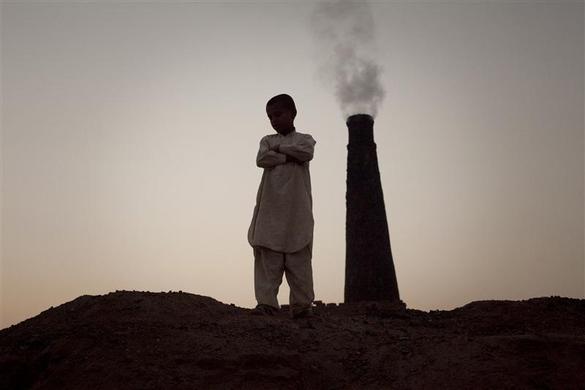 Ahsan, 12, stands looking over an oven at a brick yard in the outskirts of Islamabad November 23, 2010. Ahsan works with his family members at the brick yard and earns about 300 Pakistan Rupees ($3.5) per day.
REUTERS/Mian Khursheed
Posted by Jeannie at 3:10 AM