The lessons of philanthropy

From the Economist magazine, and I agree. Wouldn't it be a wise move for NGOs to work together and pool their resources instead of putting up barriers so they can keep their piece of the donation pie? In addition, it has long been my opinion that many countries that receive aid would benefit more from political/institutional methods of change within their own borders and, if possible, a system of accountability that makes sure aid they do receive from abroad gets to its intended audience. Indeed, if their own billionaire/millionaire citizens could practice philanthropy with their compatriots that too would be a start.
I know - if only.

May 12th 2011 | from the print edition
Leap of Reason: Managing to Outcomes in an Era of Scarcity. By Mario Morino. Venture Philanthropy Partners; 149 pages; $10. leapofreason.org


Give Smart: Philanthrophy That Gets Results. By Thomas Tierney and Joel Fleishman. PublicAffairs; 257 pages; $23.99 and £12.99. Buy from Amazon.com, Amazon.co.uk

Do More Than Give: The Six Practices of Donors Who Change the World. By Leslie Crutchfield, John Kania and Mark Kramer. Jossey-Bass; 250 pages; $29.95 and £19.99. Buy from Amazon.com, Amazon.co.uk 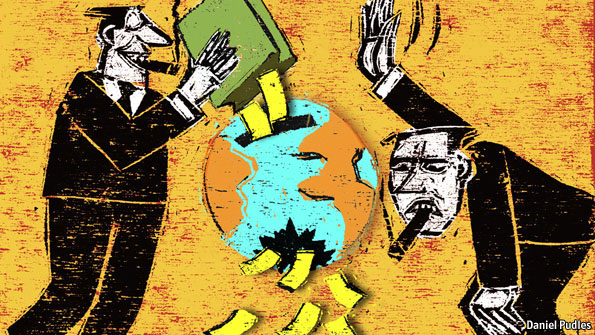 WHETHER America’s famed philanthropic tradition is all it is cracked up to be will become much clearer during the next few years. Superficially, that tradition has emerged from the global financial crisis in remarkably good shape. In the past year some 69 of America’s billionaires and billionaire families have promised to give away at least half of their fortunes by signing the Giving Pledge championed by Bill Gates and Warren Buffett, two of the world’s richest men. Among them is 27-year-old Mark Zuckerberg, a founder of Facebook, proof that America’s giving gene has passed to the next generation.

The question is, will all that giving, by the billionaires and the thousands more Americans with far smaller amounts of money, actually do any good? There is rather a depressing history of well-intentioned donations often doing nothing to alleviate society’s problems, and sometimes even making matters worse. As Mr Buffett has said many times, “making money is far easier than giving it away effectively.” Moreover, the need to give effectively, to maximise the bang for every charitable buck, is about to become even greater, as many of the organisations that receive their funds from private philanthropy or the public sector begin to feel the effects of America’s fiscal problems. Spending cuts will cause a crisis in the social sector that “will have an impact on almost every non-profit [organisation] in America, whether or not it receives government funds,” writes Mario Morino, a veteran philanthropist, in “Leap of Reason”, one of three new books that address the same thorny question of how to not merely give, but to give well.

As evinced by his subtitle, “Managing to Outcomes in an Era of Scarcity”, Mr Morino focuses on delivering results, as do the other authors, with their emphasis on smart giving and changing the world. The books draw examples from the many years the authors have spent promoting better philanthropy, and are all worth reading. Only Mr Morino is actually in the process of giving away a fortune he earned for himself, which makes him less prone to wrapping his iron fist in a velvet glove than the other authors, who are all professional philanthrocrats of different kinds. Joel Fleishman raised a fortune for Duke University and ran the American arm of the Atlantic Philanthropies; Thomas Tierney gave up his role as boss of Bain to found Bridgespan, a consulting firm for non-profits; the three authors of “Do More Than Give” work for FSG, another consultancy.

For Mr Buffett, the main reason why giving is harder to do than making money is that in business “you go after the low-hanging fruit”, whereas in philanthropy you are trying to tackle problems that are inherently difficult, such as how to educate demotivated urban kids or end rural poverty. But all three books make the case that the ineffectiveness of much philanthropy is actually the fault of the philanthropist. They applaud the motives for giving, but all make the point that people too often let their philanthropy be guided by their hearts alone. “Deciding what you will do to make change happen is a choice that requires both your head and your heart”, write Messrs Fleishman and Tierney in the best chapter in “Give Smart”, entitled “What Am I Accountable For?” The biggest problem for philanthropists, they argue, may be that “they are essentially accountable to no one but themselves.” To avoid being tempted into a self-deluded belief in their own success, philanthropists should create systems that force them to hear what may at times be unpleasant truths about the ineffectiveness of their work, and to be constantly challenged to improve.

Of the six practices of effective philanthropists described in “Do More Than Give”, two stand out as being unusual. To achieve real change—what the authors, Leslie Crutchfield, John Kania and Mark Kramer, call “catalytic philanthropy”—the best course may be to engage in political advocacy to change government policy, they argue. The Bill & Melinda Gates Foundation is doing this a lot more than most, on issues ranging from education reform to international aid. But the advice also works at a local level, as the book illustrates through the story of how the Tow Foundation improved juvenile justice policy in Connecticut. Their second sound piece of advice is that philanthropists should work together more often. This seems obvious, but as the authors rightly ask, “Why don’t more foundations actively collaborate with their peers?”

For Mr Morino, a pioneer of “venture philanthropy”, in which the donor works closely to build up the non-profits he supports, one of the key lessons is for philanthropists and non-profits to be clear about the outcomes they are trying to achieve— and to measure properly the progress they are making towards those goals. He is the first to admit that measuring the right thing is not easy, and he has wasted money by measuring the wrong things. Yet far too many philanthropists and non-profits shy away from setting goals and measuring progress. As a result they condemn themselves to ineffectiveness. This must change if philanthropy and the non-profit sector it helps to fund is to achieve the “quantum leap” in effectiveness that he believes is an urgent priority. As he says, “the time to dramatically improve our collective impact is now, when we are needed most.”
Posted by Jeannie at 8:51 AM