The Economist magazine published the following article, another example of the downside of patriarchy and tradition. For another blog on gender inequality in India click here. 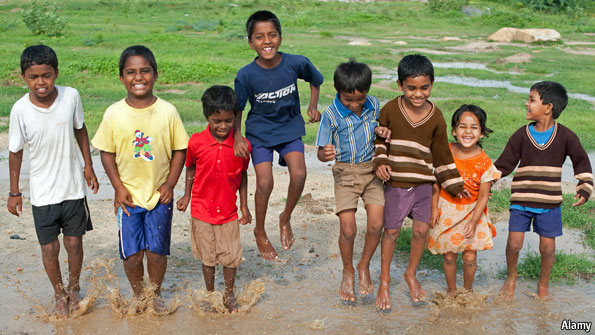 “WE’RE going for a trip”, Sakina remembers her older sister saying. Orphaned and poor, the girls were happy to leave their home in Kolkata. Taken 1,300km to Kotla, a village on the wheat plains south of Delhi, the 12-year-old Sakina was dumped in the arms of an older man while her sister fled. The man, a wage labourer, had paid over 5,000 rupees ($100, today) to a dalal, or broker, who arranged to ship unwanted girls to places short of them.

Sakina, now taking a break from the first harvest of the year, recalls the early misery of her new home. A Bengali forced into marriage, she was jeered at as a paro, a term for female outsider in Haryana, and shunned. We are treated as goats, mutters another woman, imported from Hyderabad. “It was when I started having children that I realised I had no time to be upset,” Sakina says. She has produced nine offspring, eight of them boys. Now she worries about getting brides for them—and says she is even ready to repeat her own sad history by contacting a dalal.

She may have to. Early data from February’s national census, published on March 31st, show India’s already skewed infant sex ratio is getting worse. Nature provides that slightly more boys are born than girls: the normal sex ratio for children aged 0-6 is about 952 girls per 1,000 boys. Since 1981, the ratio has steadily fallen below that point: there were 945 girls per 1,000 boys in the 1991 census, 927 in 2001 and now 914. Fast growth, urbanisation and surging literacy seem not to have affected the trend.

The ratio is most distorted in the states of the northern Gangetic Plain, such as Punjab. Haryana, Sakina’s home, remains the direst of all, with only 830 girls per 1,000 boys. More worrying, places that used not to discriminate in favour of sons, such as the poorer central and north-eastern states, have begun to do so. Economic success, argues Alaka Basu, a demographer, “seems to spread son preference to places that were once more neutral about the sex composition of their children.” The new census showed a worsening sex ratio in all but eight of India’s 35 states and territories (though those eight include some of the most extreme examples, for instance, Punjab).

The “missing girls” are usually aborted, shortly after the parents learn of their sex. A short drive from Kotla to Nuh, a typical trading town, shows how. The main road is dotted with clinics that boast of ultrasound services. Requests for a scan to check the sex of a fetus are turned down at “Bharat Ultrasound” and “City Care Hospital”, but a nervous medic at one does recommend a place that would do it.

In fact, says Gaushiya Khan, a local activist, medics are ready to reveal a fetus’s sex for as little as 600 rupees. Doing so is illegal, and discouraged by various campaigns, but the law is almost impossible to enforce. Slapping the father on the back and saying “you’re a lucky man” is hint enough. D
demand for scans is rampant. Entrepreneurs are said to tour villages with scanners on bicycles.

The impact on Indian society is grim. You might have thought that scarcity would lead to girls being valued more highly, but this is not happening. One measure is the practice of giving dowries. Almost no one, rich or poor, urban or rural, dreams of dispensing with these. Rather, as Indians grow wealthier, dowries are getting more lavish and are spreading to places where they were once rare, such as in Tamil Nadu and Kerala, in the south. In Kotla women huddled around Sakina shake their heads when asked to imagine life without dowries: “then nobody would find a husband”, they say.

A skewed sex ratio may instead be making the lot of women worse. Sociologists say it encourages abuse, notably in the trafficking of the sort that Sakina first suffered from but is now ready to pay for. Reports circulate of unknown numbers of girls who are drugged, beaten and sometimes killed by traffickers. Others, willingly or not, are brought across India’s borders, notably from Bangladesh and Myanmar. “Put bluntly, it’s a competition over scarce women”, says Ravinder Kaur of the Indian Institute of Technology in Delhi.

Men, especially if poor and from a low caste, suffer too. Women in India are sometimes permitted, even encouraged, to “marry up” into a higher income bracket or caste, so richer men find it easier to get a bride. The poor are forced into a long or permanent bachelorhood, a status widely frowned upon in India, where marriage is deemed essential to becoming a full member of society. Poor bachelors are often victims of violent crime.

Yet, bad as things are, sex selection may slowly be turning around. Though the sex ratio has been worsening for decades, it is doing so more slowly. The figure in 2001 was 1.9% worse than it had been in 1991. The figure in 2011 was 1.5% worse than in 2001—an improvement of sorts.
Moreover, the ten-year census may not capture what has been happening recently. For that, go to the sample surveys that India carries out more often. These show a different pattern. The figures are not strictly comparable, because sample surveys show the sex ratio at birth, whereas the census gives it among infants up to the age of six. Still, it is significant the sex ratio at birth is improving, not worsening. In 2003-05 the figure was 880 girls born per 1,000 boys. In 2004-06, that had risen to 892 and in 2006-08, to 904. It is not clear why this should be. The samples could be misleading. But perhaps they reveal a recent change in Indian attitudes towards the value of daughters.

The fears about India’s sex ratio are not merely of the harm that today’s level will cause when children become adults. People also worry that the ratio will get ever worse, deteriorating towards Chinese levels (which are even more extreme: on a comparable basis, China’s sex ratio at birth is about 833). This fear, thinks Monica Das Gupta of the World Bank, may be exaggerated. Not only are there signs of an incipient national turnaround, but regional figures give further reasons for hope. The states with the worst ratios, Haryana and Punjab, seem to have had skewed ratios for decades, going back to the 1880s. They now show some of the biggest improvements.

The national average is worsening thanks to states which once were more neutral with regard to sex, such as Tamil Nadu and Orissa. But because they have not had the historical experience of a strong preference for sons, Ms Das Gupta suggests, they also seem less likely to push the sex ratio to the extremes that it reached in Punjab or China. If so, the next census in 2021 could show the beginnings of a shift towards normality. With luck, the deterioration in north-east and central India—damaging though it will certainly be—may not mark the start of a fresh erosion in the value of Indian girls.
The full article can be found at  http://www.economist.com/node/18530371
Posted by Jeannie at 12:33 PM