Bangladesh and India: violence against women

In honor (belatedly) of International Women's Day here is a clip from the video, Undesired, by Walter Astrada for Media Storm. Everyday, women in South Asia face violence simply because they are women. The reasons, a mixture of culture, tradition, economics and power, are complex.

In 2001, I traveled to Bangladesh with a team of plastic surgeons from Healing the Children who performed reconstructive surgery on 33 survivors of acid violence. Mostly women, they were attacked because their in-laws demanded more dowry, they had spurned sexual advances or, in the case of 18-month old Bably, simply because of their sex. Bably's father attempted to kill his daughter by pouring acid in her mouth and down her throat. His parents - the baby's grandparents - tried to hide the crime; however, Bably's mother Parul was very brave and split with her in-laws to save her daughter. Bably not only survived, but thrived and can be seen here dancing at her birthday party in 2006.

Another survivor, Ferdousi, was 15 years-old and attending school. She said 'no' to a boy who wanted to have sex. After threatening many times to burn her, one day as she left school he threw acid in her face. She lost her sight. Ferdousi attended a school for the blind in Dhaka and received money from the Acid Survivors Foundation for her tuition. Of her case, Anita Bell then working with the foundation asked, "Will Ferdousi get married? To be unmarried in Bangladesh is almost like a bad disease! You have really failed as a woman in Bangladesh to not get married." Ferdousi did complete high school and entered college.

While dowry is a traditional and customary exchange of wealth from the bride's family to the wife and her husband at the time of a couple's wedding, often demands continue well into the marriage. Particularly important is the fact that the new couple most often reside with or near the husband's parents and brothers, including married brothers and their families. In one instance, when her family could not pay more dowry, a married woman with three children was held down by her brother-in-law and sister-in-law while her husband poured acid on her genitals. She fled with her children to the Acid Survivors Foundation. Her husband and in-laws received life sentences in prison. 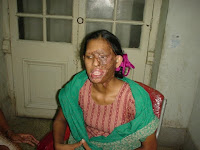 Other reasons for acid violence include land disputes and revenge. Often burned in the night, sometimes children too are harmed while sleeping with their mothers.

Parveen, pictured here, became our helper at Dhaka Medical College Hospital during the one-week surgical mission. The beautiful girl in pigtails to the right seemed too young for such a tragedy. Many had lost not only their eye sight, but their eyes. They had missing ears and hair and could not close their mouths or turn their heads. All lived at the Acid Survivors Foundation where they received medical care, counseling, vocational training and legal assistance. Most of the time these crimes went unreported. With the international recognition of the  Acid Survivors Foundation, many laws have changed in Bangladesh to limit and control the sale of acid, to assist survivors and to punish perpetrators. However, acid violence continues and it is estimated that someone is burned every two days.
﻿﻿

﻿In India too women are burned through acid violence. In both India and Bangladesh, girls are seen as a burden on the family. Many female fetuses are aborted or, if carried to term, killed immediately after birth. Raising a daughter is equated with 'watering the garden in another man's yard' and second daughters considered  'born for the burial pit.'

The following story was published on MediaStorm (the complete story with photos can be found on their web site) by Asia Society Producer Shreeya Sinha, who reported, shot video, and field-produced Undesired by photographer Walter Astrada, winner of the 68th Pictures of the Year International for Multimedia Issue Reporting.
﻿﻿ ﻿﻿﻿﻿
The United Nations reports that at least 40 million women in India have died from neglect or were simply never born in the first place. Dr. Amartya Sen, a Nobel laureate, first applied the term "missing" to this phenomenon in 1986 when he examined India's census data. Among Christians and Muslims, the female to male sex ratios were close to normal. Among Hindus, who make up 80 percent of India's population, the gender imbalance would spark a demographic crisis.

Until the 1980s, when ultrasound machines became more widespread, girls were commonly killed at birth or were neglected of health and nutrition to ensure their death. Baby girls were left in dumpsters, buried in clay pots or poisoned. Shocking, yes, but the practice still continues. Across the country there is a 47 percent excess female child mortality, girls aged 1-to-4 who are dying before their life expectancy because of discrimination. In the north, specifically the wealthy state of Punjab and neighboring Haryana, the excess female child mortality is 81 and 135 percent respectively, according to India's National Family Health Survey.

The arrival of ultrasound machines, and its subsequent exploitation, ushered in a silent era of organized crime. Now able to identify the sex of a fetus early in pregnancy, parents who learn their child is a girl often abort her. The government has banned abortions based on gender for the last 16 years. Every ultrasound clinic is required to have a poster explaining the law, yet this $250 million business a year flourishes because of deeply entrenched traditions, official apathy and the lucrative business of illegal ultrasounds.
﻿﻿

Every day 7,000 female fetuses are aborted in India, according to the UN.
Posted by Jeannie at 8:21 AM